MARC Barroca was as surprised as everybody else after he emerged as the leading vote-getter for this year’s PBA All-Star week.

The Star Hotshot guard received a total of 32,793 votes from fans who cast their ballots either in game venues or online to beat the likes of favorites James Yap of Rain or Shine, Globalport’s Terrence Romeo, Marc Pingris of Star, and San Miguel’s June Mar Fajardo.

Barroca admitted he wasn’t even aware of it until SPIN.ph called his attention when the votes were officially announced by the league on Thursday.

A part of the original Smart Gilas team, Barroca leads the starting unit of the Mindanao All-Stars, who clash with the national team of coach Chot Reyes on April 26 at the Xavier University gym in Cagayan de Oro City to kick off the special three-leg All-Star week.

Barroca, who hails from Zamboanga City, is suiting up in his fifth All-Star and will be a starter in the mid-season spectacle for the third time. 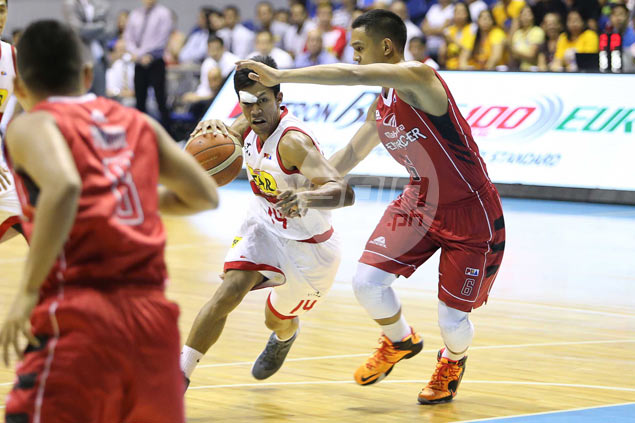 But the 30-year-old guard hopes he’ll be on the winning side this time as he admitted losing in all his four previous All-Star appearances.

“Lagi akong talo sa All-Star. Ang puro panalo ako doon sa sayawan,” he said laughing, obviously referring to the ‘dance off’ between the two All-Star teams that has become a regular fanfare during the yearly festivities.

The Mindanao All-Stars will be handled by Star coach Chito Victoloero, which quickly makes Barroca feel at ease.

Being a former national mainstay, Barroca said playing in the All-Star is also his way of personally helping Gilas Pilipinas. The national team is using the three-leg event as part of its preparations for the Southeast Asian Basketball Association (Seaba) Championship this May at the Smart Araneta Coliseum.