THE preseason match between GlobalPort and the visiting Kuwait national team was stopped late in the third quarter after Batang Pier guard Terrence Romeo nearly came to blows with a Kuwaiti player on Saturday at the Gatorade Hoops Center.

Romeo was shoved hard by Kuwait's No. 9 player during the dying seconds of the third canto, but no foul was called. Moments later, the GlobalPort guard claimed he was hit by the same Kuwaiti, triggering a scuffle that saw Romeo chasing the player infront of the visitors' bench. 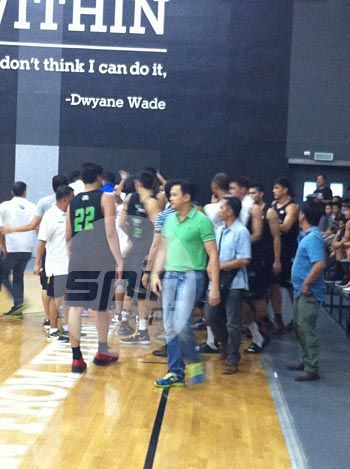 GlobalPort coach Pido Jarencio, along with several Batang Pier players, quickly pulled Romeo out of the scene to prevent the situation from escalating.

After GlobalPort teammates grabbed hold of Romeo, it was the Kuwaiti who went on the offensive, challenging the former FEU star to a fight.

No punches were thrown and the game was eventually called off by Kuwait's national coach with GlobalPort comfortably ahead, 71-49 with 0.9 second left in the third.

Romeo later told Spin.ph that he didn't start the melee - but wouldn't back down when challenged.

The former UAAP MVP said he simply kept in mind Jarencio's constant reminders to his players to never allow themselves to be intimidated by anyone.