IT’S a bond that has gone beyond the realm of player-fan relationship.

To many, she’s the colorful PBA cheerleader who does her thing on the sidelines while supporting and rooting for her favorite player and team.

To Globalport big man Doug Kramer though, Jun Nuestro, or more popularly known in basketball circles as ‘Sharon,’ is like a family, a loyal friend who’s been with him through the ups and downs of his pro career.

Now that his No. 1 ally is down, Kramer is making sure he’s returning the compliment in his own small way.

While she still attends games of the Batang Pier – and of course, Rain or Shine, the team to which she professed her love to – Sharon no longer gyrates, dances, and entertains the live crowd at playing venue like she did in the past.

Nowadays, the transgender cheerleader walks around with an obvious limp on her left foot and a cane on her hand, a sad reminder of the stroke she suffered one early morning of May in 2013.

The stroke left her hospitalized for a few days and unfortunately, left one of her legs semi-paralyzed. Although prognosis of her regaining the strength of her left foot is positive, and doctors expect her to eventually be able to walk normally again, the process by which Sharon has to deal with is a little bit costly as it meant undergoing therapy three times a week.

For someone whose only means of living is to cheer professionally, the therapy sessions are definitely prohibitive.

But to her surprise, there was Kramer to help her and somehow, defray the cost of her medical bills.

Without Sharon asking for anything, it was Kramer who paid for almost half of her bills when she was hospitalized. And though a lot of his friends in the PBA circle – including Rain or Shine management, former coach Yeng Guiao, Beau Belga, among others – helped her financially as she recovered from the stroke, it was the Globalport big man who continuously pays for her thrice-a-week therapy up to this day. 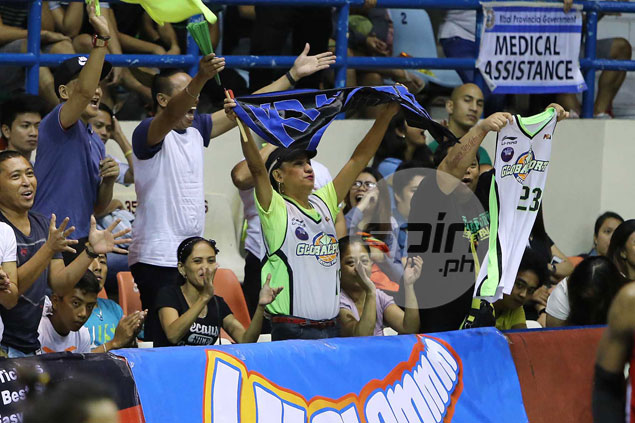 For Kramer, the deed is a simple way of showing his appreciation to someone ‘who’s been there with me since the start.’

Sharon has been around in the pro league for so long she has outlasted the first team (Presto) and first players (Allan Caidic, Zaldy Realubit, Jun Limpot, and Vergel Meneses) she had rooted for.

The former entertainer never had any liking for the game before, and was actually just invited to watch a PBA game by a friend, Danny Buenviaje, a certified Caidic fan, during the 1990 All-Filipino conference finals between Presto and Purefoods.

It was during the title series that the public first got to know Sharon, who entertained the fans with her choreographed dances during break while wearing a one-piece swimsuit, sashaying down a flight of stairs at ringside and bending backwards on the court railing, ala super model.

She was hooked from there.

Sharon, named after megastar Sharon Cuneta, who acquiantances said had a strong resemblance to her during her youth, began as a personal cheerleader of Kramer the moment he began playing as a pro as the first round pick (fifth overall) of Air21 during the 2007 Rookie Draft.

She would cheer for him day in and day out regardless of the team he played for, from Air21, Rain or Shine, Ginebra, Powerade, Barako Bull, San Miguel, and now with the Batang Pier.

The two's friendship became so deep through the years that Sharon also got close to Doug’s wife, and even to their three celebrity kids.

Like family, the Kramers were saddened and somehow affected when they heard about the bad news that happened to their No.1 supporter. In no time, Doug reached out to lend a helping hand.

“It’s a small way of saying thank you for being supportive through these years,” said Kramer. “Siya yung cheerleader ko na consistent na parating pumupunta. Through thick and thin andiyan siya, and to me, that’s important. I value our friendship.” 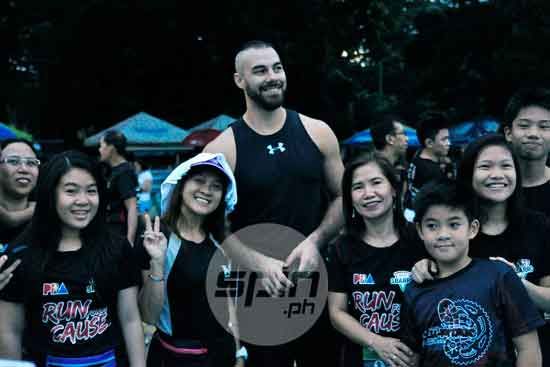 And just last Christmas, Doug gifted her something for her family’s noche buena.

Kramer said he’ll never get tired of helping others, especially Sharon, who he hopes, would finally recover from her stroke.

“If I’m capable naman of being a blessing to others, and Sharon is in need, I’ll give what I can,” he said. “I’m glad she’s slowly getting better, and hopefully, she’ll get even better.”

On Saturday, Sharon turns a new leaf, and other than hoping to fully recover from her ailment, she also wishes the league, which she’s been supporting for the past 26 years, will be able to acknowledge the contributions of cheerleaders like her.

And not even her physical disability could stop here from doing what she does best.