BARANGAY Ginebra showed it can be on the winning end of a blowout against TNT KaTropa as it coasted to 121-94 victory over the Texters to gain a headstart in their PBA Governors’ Cup semifinal series on Monday night at the Smart-Araneta Coliseum.

Surrendering a 29-point decision to the Texters in their last game in the eliminations, the Gin Kings banked on a hot start and never showed any letup on the way to cruising to the Game One victory.

Justin Brownlee sparked the blowout, before Joe Devance and Greg Slaughter took over in the second half and led the local crew for the Gin Kings, who scored a second straight blowout win following a 20-point win over San Miguel Beer in the quarterfinals.

“They beat us up in the elims and we got them today, so Game Two is going to be exciting,” Gin Kings coach Tim Cone said. “On one hand, we’re happy we played like this. On other hand, we just filled their bag with a whole lot of motivation.”

Game Two of the best-of-five series is on Wednesday night in Batangas City.

Brownlee scored 15 of his team-high 21 points in the first half, completing another all-around effort with eight boards, five assists, three steals, and one block in just 28 minutes as the do-it-all import didn’t have to do any heavy-lifting in the last two quarters.

Devance added 19 points, highlighted by three triples, four boards, three assists, one steal, and one block, without committing a single turnover in almost 27 minutes of play, while Slaughter chipped in 16 points, seven rebounds, five assists, and four blocks in 21 minutes off the bench.

Mark Caguioa even joined the scoring party, scoring all his 13 points in the final frame, while Jervy Cruz, and Aljon Mariano also delivered in their own right off the bench.

That was mainly due to playmakers LA Tenorio, Scottie Thompson, and Sol Mercado swinging the ball around as the Gin Kings dished out an impressive 34 assists as a unit.

Glen Rice Jr. led the Texters with a 26 points and 10 boards, but committed seven errors and hardly got help from the locals outside Jayson Castro. 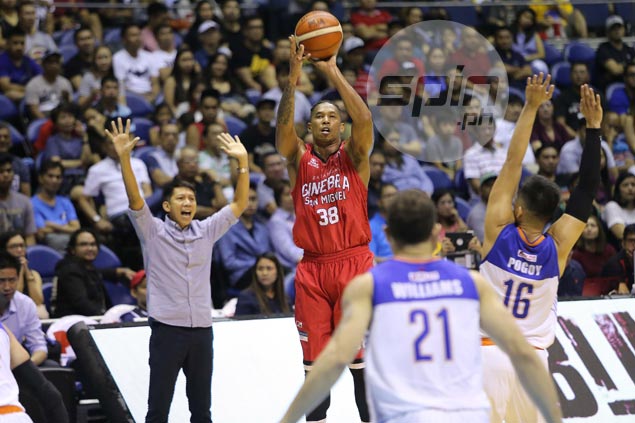