ANTIPOLO - Barangay Ginebra conjured its never-say-die spirit when it mattered as it beat Alaska, 85-81, on Sunday night to force sudden death in their PBA Philippine Cup quarterfinal playoff.

The Gin Kings banked on a huge third-quarter turnaround that saw them erase a 17-point lead, before weathering a late stand by the Aces to pull off the hard-earned win before a sellout crowd of 10,041 fans at the Ynares Center.

Sol Mercado was involved in two game-defining plays, dishing out an assist to Kevin Ferrer for a floater before scoring on an inside incursion to give the Gin Kings enough cushion to hold on.

Mercado missed two free throws after that to keep the door open for the Aces, but luckily LA Tenorio was there for an offensive rebound before drawing a foul and splitting his charities to seal the deal.

“Our guys battled all the way through; sometimes we battled each other,” Gin Kings coach Tim Cone said. “We did what we had to stay alive.”

“But all we’ve done is tie the series, so we’re not going to be happy about this one, not cheering,” he added.

The Gin Kings can complete the upset over the twice-to-beat Aces in the do-or-die game on Tuesday night at the Big Dome.

Tenorio showed the way with 16 points, all but one in the second half as he conspired with fellow playmakers Scottie Thompson and Mercado, who both scored eight in the third quarter where they outscored the Aces, 33-13, to turn the game around and go up by eight entering the final frame.

Even without Joe Devance, who suffered a leg injury in the third and didn’t return, the Gin Kings took the Aces’ best punches and still held their ground to prevail.

Thompson added 15 points, 10 boards, and one assist, and two steals, while Japeth Aguilar chipped in 15 points and 14 caroms.

Calvin Abueva led the Aces with 20 points, 10 boards, three assists, and two blocks in 34 minutes, while JVee Casio kept them afloat with 11 of his 16 points in the fourth quarter. 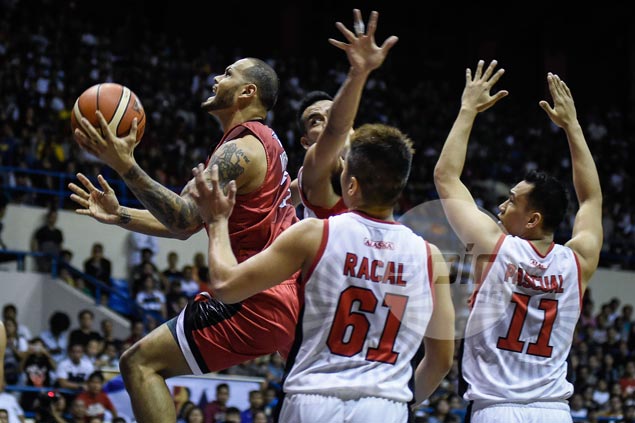