BARANGAY Ginebra couldn’t have picked a better time to snap its skid, outlasting mighty San Miguel Beer, 100-96, to hand the Beermen their first defeat in the PBA Philippine Cup on Sunday night at a packed Smart-Araneta Coliseum.

The Gin Kings lived up to their never-say-die reputation, overhauling an early 16-point deficit before weathering SMB’s own comeback attempt on the way to the hard-earned win in anticipated matchup between sister squads that lived up to its billing.

LA Tenorio and Japeth Aguilar showed the way while Raymond Aguilar was the next man up for the shorthanded Gin Kings, who snapped a three-game skid and improved to a 3-3 win-loss record while dealing the Beermen their first loss in six games.

“Who would’ve thought we would win this game after the way we played the last three games,” Gin Kings coach Tim Cone said. “We had guys step up today. Can’t talk enough about Raymond, the ‘other’ Aguilar, for once.”

“At the start of the game, I thought, wow, this was a mismatch … but our guys dug in made a run at halftime and carried that momentum in the second half,” he added. “We got ahead and started believing. I think we forget how good of a team we can be.”

The thrilling affair, however, was marred by a controversial incident that saw Chris Ross get called for a technical foul for taking a free throw that teammate Chico Lanete was supposed to shoot, derailing SMB’s rally and allowing the Gin Kings to preserve their lead.

But that didn’t take away the character the Gin Kings showed, overcoming the absence of Greg Slaughter and Joe Devance, and a 17-33 deficit late in the first quarter to turn the game around in the third canto where they outscored the Beermen, 28-14.

The 6-foot-5 Aguilar stood tallest in the absence of his fellow big men, holding his own against four-time MVP June Mar Fajardo on defense, and providing a timely offensive boost with 16 points, including two triples, along with two rebounds in almost 30 minutes as a surprise starter. 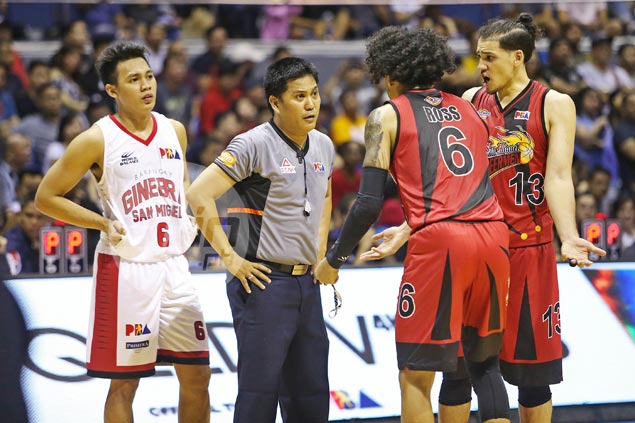 Aguilar led the bench crew with Jervy Cruz, who registered 17 points, including 10 in the payoff period, on top of seven rebounds, and two asissts.

Tenorio finished with 23 points, six assists, five boards, two steals, and one block, while Japeth Aguilar added 23 points, nine boards, and two assists for the Gin Kings, who saw the Beermen rally from 14 points down, 66-80, and pull to within two points, before Ginebra held on.

Fajardo still dominated with 33 points on 12-of-16 shooting, 11 rebounds, four assists, four blocks, and one steal, against six turnovers in almost 40 minutes, but the Beermen, as a unit, failed to find an answer to Ginebra’s third-quarter turnaround as their fightback fell short.