BARANGAY Ginebra continued to thrive in do-or-die situations as it eliminated Star, 89-76, on Tuesday night to earn the right to face San Miguel Beer in the PBA Philippine Cup Finals.

The Gin Kings simply showed they wanted it more than the Hotshots as they zoomed to an early lead and stayed in the driver’s seat until the final buzzer of Game Seven in front of the second-largest crowd this conference of 20,221 people at the Mall of Asia Arena.

Sol Mercado, LA Tenorio, Japeth Aguilar, and Scottie Thompson shone brightest, while the star quartet also drew timely contribution from Joe Devance and Jervy Cruz to frustrate the Hotshots after falling on the brink of elimination with a 3-2 deficit in the best-of-seven series.

“Sometimes, it can really be tough leading in those games because the pressure falls on you now, the expectations are on you to win, and you end up trying to be a little bit careful and play not to lose, but our guys did a good job of pushing and pushing, and battling and battling,” he added.

[See Amid joyous scenes, Big J quick to remind Ginebra: 'You haven't achieved anything yet']

What was expected to be a dogfight turned into a blowout as the Gin Kings led from start to finish to became one of the lowest-seeded teams to reach the finals.

Now, the seventh-seeded Gin Kings continue their bid for back-to-back championships as they face the top-seeded Beermen starting in Game One of the finals on Friday night also at the MOA Arena.

Mercado paced the Gin Kings with 23 points embellished by four triples, scoring seven in the opening period where Devance scored all his seven points as the duo conspired in giving the team a 10-point lead. 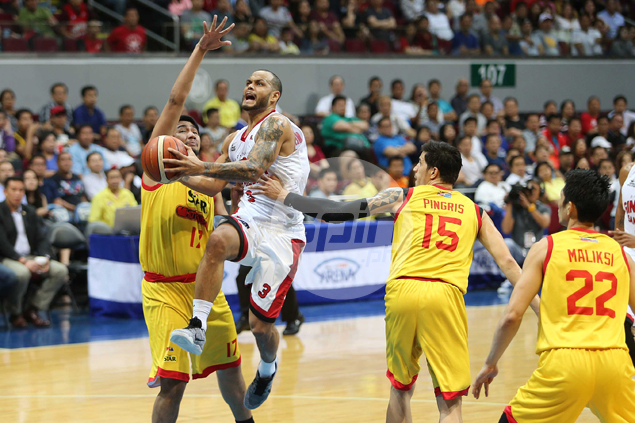 The Gin Kings sustained the sizeable cushion as LA Tenorio kept them comfortably ahead in the final frame where he fired 10 of his 21 points as the Hotshots came no closer than three points.

Aguilar added 19 points and five boards, while Thompson chipped in 10 markers and missed a double-double by just one rebound.

Allein Maliksi put up his best game of the conference with 22 points on 9-of-13 shooting, and five boards, while Marc Pingris again carried most of load with 17 points, eight boards, six assists, two blocks, and one steal in 40 minutes for naught.