Four top players in danger of not being part of Gilas 3.0 pool under Tab Baldwin

NOW we're certain that the formation of the next Gilas Pilipinas team has been far from smooth sailing for Tab Baldwin, who, insiders confirmed, has yet to get the commitment of most PBA teams with regards to the players he wants for the national pool ahead of the Fiba Asia championships.

One insider said he's not even close to getting the players that he wants for Gilas 3.0.

Red flags were raised when the PBA and Baldwin kept pushing back the announcement of the 26 players on Baldwin's wish list, which was supposed to be made public weeks ago.

Those fears were confirmed by one insider who wondered why Baldwin is not getting the full support from PBA team owners when the pro league itself was part of the selection committee that named the American-New Zealander to the national coaching job.

[See Baldwin having a hard time getting players for Gilas 3.0]

Unlike former Gilas coach Chot Reyes who was appointed by the Samahang Basketbol ng Pilipinas (SBP), the insider pointed out Baldwin was named by a committee of major stakeholders headed by the PBA itself and should be getting the full support of the owners.

That obviously is not the case.

Another source from the SBP admitted the basketball body needs to sort out the lineup - and fast - since Baldwin is set to start practices on August 1 and not all the players he wants are on board.

With that, we name four players who are at risk of not being part of Gilas 3.0:

Paul Lee made quite an impact as a late addition in the Gilas team that went to the Fiba World Cup last year, but sources revealed he is not yet a sure thing for the next batch of national players.

Baldwin, sources said, has yet to get an assurance that he can have all the Rain or Shine players that he wants, unlike last year when three Painters - Jeff Chan, Gabe Norwood and Lee - as well as reserve Beau Belga were made available to the Gilas program.

Calvin Abueva's stock has risen since the last time Gilas went to war, proving to be an 'X-factor' for an Alaska team that has maintained its status as one of the elite teams in the league.

But for some reason, 'The Beast,' sources said, was not on the wish list of Baldwin. Neither is guard JVee Casio. Instead, the national coach wants veterans Sonny Thoss and Dondon Hontiveros from Alaska, as well as Alex Compton who he is set to name to his Gilas coaching staff.

The last time they were called up for Gilas, Greg Slaughter and Marcio Lassiter begged off, basically saying they don't want to take World Cup spots away from the national players who suited up in the Philippines' runner-up finish to Iran in the Fiba-Asia qualifier. 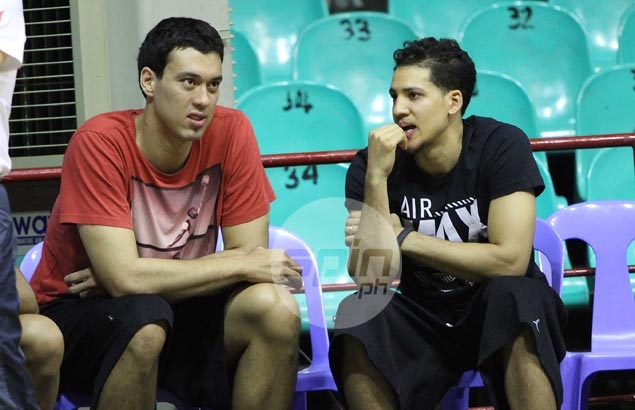 Now the two are once again on the spotlight as talk once again centers on the commitment the San Miguel Corp. group is willing to give to the Gilas program, which, we all know, is being run by the rival MVP camp.

Among the players under the SMC umbrella that can be considered for Gilas duty are June Mar Fajardo, Arwind Santos and Marcio Lassiter of San Miguel, LA Tenorio, Japeth Aguilar and Slaugher of Ginebra, and Marc Pingris, Mark Barroca, PJ Simon and Joe Devance (Star).

The big question is, who among them is San Miguel willing to lend?