IF there's anything uglier than Air21's fourth-quarter meltdown against San Miguel Beer on Saturday night, it should be the playing jerseys the Express wore for the out-of-town game in Binan, Laguna.

Air21's uniforms, as seen from picture above worn by Joseph Yeo and Simon Atkins, looked two sizes too big to be sleeved jerseys worn in the league by GlobalPort and were certainly ill-fitting.

Well, if the Express' jerseys looked more like warm-up shirts, it's because they are.

No thanks to Asi Taulava's playing jersey which mysteriously went missing hours before the PBA Governors Cup road game, Air21 was forced to play with its warm-up kits on the way to the 88-101 loss to the Beermen.

When the evergreen slotman was contacted by Spin.ph later and asked how in the hell his playing jersey could go missing, he explained that it was left hanging in his cubicle which happened to be nearest to the door of the dugout before the game and realized too late that someone had snatched it.

Once the team was put in a quandary, it was Taulava's teammates who suggested that the whole team play with their warmers so their slotman won't have to sit out the game.

"All of my teammates just went to me and said: "Kuya, you play, we'll just wear our warmers. You need to play. We need you there."

Taulava added: "I am proud of my teammates for the sacrifice they gave to let me pkay. I was really decided to sit out tonight.

"Playing with sleeves was truly uncomfortable and yet they played with that uneasiness just to have me on board. It was a big distraction to me and the whole team. The ballboy took the blame."

The former league MVP also said he is not angry at the fan who stole his jersey.

"Nothing bad against the fan (who stole it). You can't blame them. They wanted a souvenir. Now it's a lesson for me not sit beside the door.

"But a message to the one who stole it: I am a generous person, I can give him my jersey if he'd ask. Just let me finish a big game first," added Taulava, who had earlier given away his reserve jersey to a fan.

Well, that's a lesson learned for Asi. Here was his tweet afterwards:

And chances are, the Express won't ever wear those warm-up shirts during a game again.

The jerseys not only looked bad on the players, but they proved to be bad omen as the team got knocked out of the race for a Top 4 place - and a twice-to-beat incentive in the playoffs - by the loss to the Beermen. 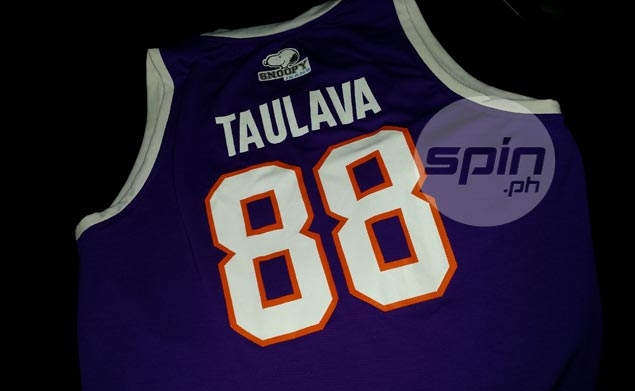