IN just his third conference in the PBA, he has already become a fixture in Ginebra’s starting lineup owing to his nifty playmaking and impressive timing that has allowed him to amazingly get rebounds over taller PBA players.

But unknown to many, there was a time when Scottie Thompson couldn’t even crack the main rotation of his college team due to his thin frame.

Former University of Perpetual Help coach Boris Aldeguer admitted Thompson had to come off the bench as a third-string guard, before earning his spurs in his rookie year.

Aldeguer was the Altas coach when Thompson first arrived at Las Piñas, but didn’t have a chance to handle him in the NCAA after abruptly resigning before the start of the 2011 season, Thompson's rookie year.

But Aldeguer already saw plenty of potential in Thompson, who was discovered by former Perpetual juniors coach Tonichi Pujante after seeing him represent his region at a Palarong Pambansa edition in Tarlac.

“When he came in, ang payat pa ‘nun eh, although nakita ko na may hops na, may explosiveness already in his game at tsaka may utak na,” Aledguer said.

And that’s what Thompson banked on as he eventually made it to starting unit in his rookie season, averaging 6.6 points, 4.2 rebounds, 1.9 assists, and .7 block in 18.3 minutes while starting in 11 of 18 games.

“You could already see that he had the potential,” Aldeguer said. “When he played already in his first year, na-utilize agad siya because we lost two players to ineligibility at nabigyan talaga siya ng opportunity and what’s nice is he made the most out of it.” 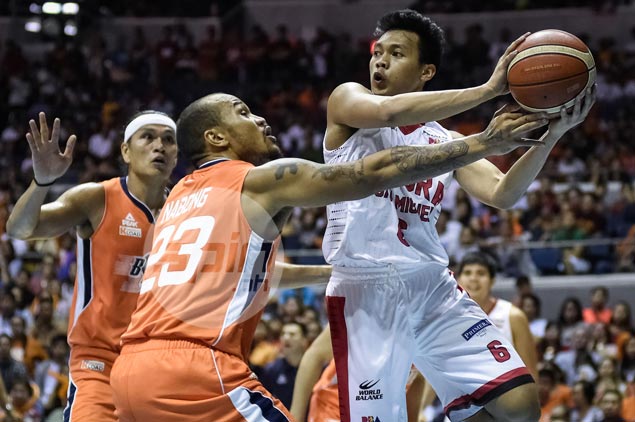 Thompson has developed into arguably the best all-around player during his time, highlighted by his last two years when he nearly averaged a triple-double.

And Aldeguer is hardly surprised that the former NCAA MVP, who stands a shade below 5’11”, can rise above everybody to snatch a rebound to earn a reputation as already among the best-rebounding guards in the pros.

“Actually not because malaki siya, but he has the smarts, ang ganda ng ball sense niya eh,” said Aldeguer, who has been focused on the L Salle-Zobel juniors team since his resignation from Perpetual.

“He knows where the ball will bounce, so lagi siya a step ahead, so that’s why despite his thin frame, he’s able to rebound against the bigger guys.

“That tells you about the mentality that he has,” he added of the 23-year-old rookie, the No. 5 pick in last year’s draft.