WHILE he had tried his hand at coaching, Bal David admitted handling a team doesn’t really appeal to him.

That's exactly what 'The Flash' will be doing for two months starting April 18 when David returns to his first love once more as he unveils this year’s edition of the ‘Flash Ballers Camp.’

Now on its fifth year, the annual cage camp will be held at the Octagon Village Covered Court in Dela Paz, Pasig City, with no less than David spearheading all eight quality sessions every Tuesday, Wednesday, Saturday, and Sunday from 8 to 10 a.m.

“Kapag team kasi ang hawak mo, you’re only limited to 12 to 15 players. Unlike kapag clinic, mas madami kang ma-share in terms of your basketball knowledge and experience,” said the 44-year-old David, who played for the Ginebra franchise from 1996 to 2005.

Similar camps will be held in Las Pinas at the Elizabeth Seton School, BF Resort, Las Pinas campus on May 6 onwards (Tuesday Thursday,Friday,and Saturday), another one in Antipolo at the St. John’s Wort Montessori School, Antipolo campus, Rizal on April 21 (Monday, Thursday, and Friday), and in Tierra Pura in Quezon City (schedule and venue to be announced).

No less than current and former Ginebra players such as Scottie Thompson and Japeth Aguilar, along with Vince Hizon, Jayvee Gayoso and David’s close pal Marlou Aquino will be personally endorsing the camp that began in 2012.

David, a four-time All-Star and one-time member of the PBA Mythical Second Team, tried coaching for a while with Fern-C in the defunct Philippine Basketball League, and once served as deputy to former Ginebra teammate Rodney Santos at Livermarin in the D-League.

The product of University of Santo Tomas, where he won back-to-back UAAP championships in 1993 and 94, said he’ll be thinking twice if ever a coaching job comes his way again, stressing his heart is really into teaching kids and young ones the finer points of basketball.

There’s one thing that could change his mind though, if and when a tempting offer is given to him – a coaching stint with Santo Tomas. 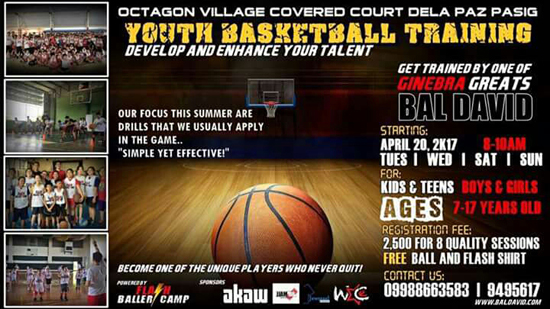