FIVE businessmen with heavy influence in Philippine sports made it to Forbes magazine’s 50 richest Filipinos released in its September 2016 issue, which features a record number of Filipino billionaires.

San Miguel Corporation head Ramon S. Ang has a net worth of $1.21 billion (P56 billiion), which put him in 16th place in the Forbes list, while SMC chair Danding Cojuangco follows in the 20th spot with $1.14 billion (P53 billion).

Cojuangco also used to be 'godfather' of Philippine basketball after backing the national team through Northern Consolidated.

Curiously, at least five of the 50 richest Filipinos are invested in San Miguel, which propelled its stock value up 50 percent thanks to the company’s growth strategy in energy and infrastructure, according to a report by Forbes.com’s Keren Blankfeld.

Wilfred Uytengsu, owner of Alaska in the PBA and also an organizer of triathlon competitions, is at No. 36 with $260 million (P12 billion).

Rounding out the list of Filipino sportsmen in the list is GlobalPort team owner Mikee Romero with a value of $150 million (P7 billion), good for 49th place.

Topping the list of sportsmen is Enrique Razon, currently the biggest supporter of Philippine golf through International Container Terminal Services Inc. (ICTSI) which bankrolls the country's golf circuit and sponsors top players, both pros and amateur.

Razon is ranked No. 8 in the list headed by Henry Sy with a net worth of $3.5 billion. 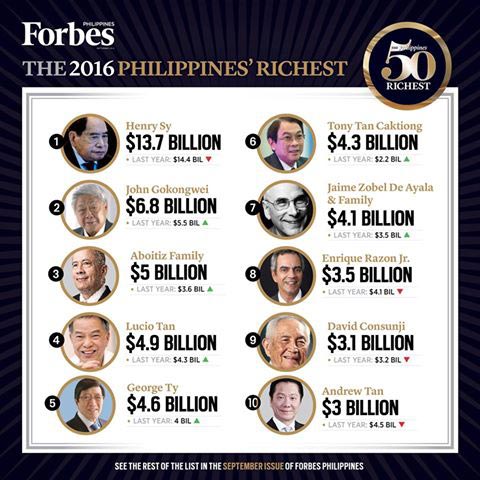 A party-list representative (1Pacman) in the Congress, Romero made his second appearance in the list with the bulk of his fortune coming from his port operations. But aside from his real estate business and various stock investments, Romero, 43, is also vice chairman of AirAsia Philippines.

Romero credited his business success to his passion for sports. Aside from basketball – he played for La Salle during his college days – Romero is also into shooting, martial arts and polo. He has staged several international polo tournaments in the country as well.

“His passion for sports is the same as in business,” said Erick Arejola, Romero’s trusted lieutenant.