ANOTHER lackluster San Miguel Beer campaign has sparked a clamor for yet another shuffle of the team's coaching staff, and one familiar name is rising to the top.

After an underachieving season that saw a talent-laden Beermen side make the semifinals just once and tumble out at the quarterfinal stage twice, fans online have piled pressure on active consultant Todd Purves who has taken a lot of flak for the latest misstep of a once proud team.

Three names have contantly cropped up in online discussions on who the next San Miguel coach should be: Franz Pumaren, former Alaska coach Luigi Trillo, and, curiously, Gee Abanilla, who was demoted to team manager when Purves was tasked to take control of the team this season.

Of the three, however, Pumaren's name has drawn a lot of buzz, which is undertandable.

Franz afterall happens to be a former San Miguel player from the team's glory days in the eighties, and is in fact one of the most successful among the former Beermen stars who transitioned to coaching.

Pumaren is also coming off an impressive year as coach of Air21, which he has transformed from a perennial cellar-dweller into a league darkhorse in the three years that he has built the team from scratch.

Also, the uncertainty of Pumaren's status at Air21 after the company's admission of ongoing negotiations for the sale of the ballclub to NLEX/ Metro Pacific Investments Inc. has led to calls for the former back-up guard to return to the team where he was part of the 1989 grand slam team.

Pumaren, though, refused to comment on the fans' calls, saying he is still Air21 coach until his contract expires at the end of August. There are also questions on the status of the Pumarens' relationship with the SMC organization under the leadership of Ramon S. Ang.

Here's a video of a poll among San Miguel fans:

But former Beerman Joseph Yeo believes his former La Salle coach and now Express mentor has what it takes to lead San Miguel back to the path of success.

Asaytono, however, warned that bringing in Pumaren or any other coach to lead a star-studded San Miguel roster won't mean instant success for the ballclub.

Here are some fans reactions to an unofficial poll by Spin.ph: 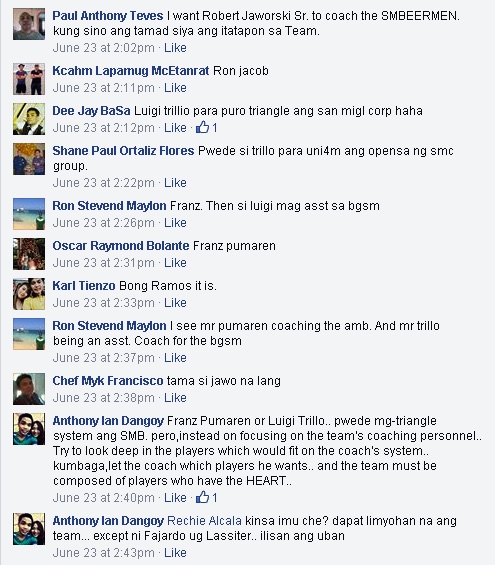