BOTH sides of these PBA Governors’ Cup semifinals feature the same plot: two sister squads going at it for a spot in the finals of the season-ending conference.

But there’s a huge difference in their respective audiences.

While San Miguel Beer and Barangay Ginebra have played in front of sizeable crowds in their first three meetings at the Smart-Araneta Coliseum, TNT Katropa and Meralco have seen sparse attendances during their first two games also at the Big Dome.

It’s no secret what drives the crowds during the matches of the SMC group teams as Ginebra is the league’s most popular team after long carving out a never-say-die reputation, while SMB is not far behind thanks to its long tradition of success.

But the Texters and Bolts also offer quality basketball, so that makes for a curious case on why they have small fan bases.

“It’s hard to say,” Alapag said after their Game Two win. “Obviously, Ginebra has a huge following, so it’s really out of our control.”

If success is a measure, it’s understandable to have a small fanbase if you hardly deliver wins.

The Beermen are the league’s most successful team with 22 championships, while the Gin Kings own eight titles. But the Texters have seven championships under their belt and have been one of the most dominant teams over the last decade. The Bolts have yet to win one championship, but have been making huge strides the last two seasons.

For Ginebra fan Proi Reyes, 32, it has something to do with the players in the lineups, saying the Texters and Bolts have few names that simply stand out. 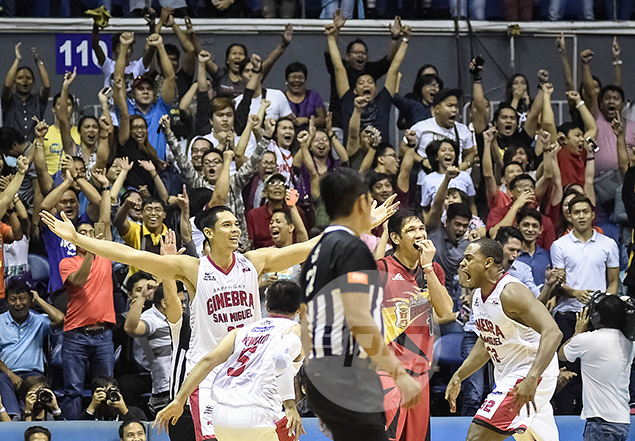 The Bolts entered the league only in 2010 after acquiring the Sta. Lucia franchise, while the Texters, although joining Asia’s first professional league in 1990, have only started using the Talk ‘N Text brand in 2001 after Smart Communications absorbed the operations of Mobiline.

The Beermen, for their part, are the only remaining pioneer franchise of the league, while Gin Kings joined the league four years after its inception in 1975.

While he doesn’t mind playing before small crowds, veteran Bolts forward Reynel Hugnatan would still be thrilled to play in front of a large audience.

“The fans help make the game what it is and we’d love to see more people come out,” said one of the league’s true ambassadors.

And that’s what he hopes to see for his team moving forward.

“We hope the crowd will improve as the series progresses,” Alapag said. “Obviously, that’s a great series on the other side, but hopefully the public can see (after Game Two) that, hey, it’s just as interesting a series with us and Talk ‘N Text.”

“All we can do is go out there and compete and play the best we can and, hopefully, the fans will see it’s great basketball in this series as well,” he added.