NOT just one but three shots at another PBA championship, including the elusive Philippine Cup crown.

Veteran wingman Dondon Hontiveros has nothing but that in mind when he decided to forego retirement and agreed to re-sign with Alaska for another full season.

The 39-year-old admitted his desire to win yet another championship before finally hanging his jersey and begin charting a possible career in coaching changed his mind about his retirement plans.

“Yun ang pinaka-goal ko, so I have three more chances to do it,” said the Cebuano cager, who’s currently in Los Angeles for a well-deserved, two-week break.

Of course, on top of it all is the chance to finally nail an all-Filipino crown, the only title missing from his collection in his 16-year career.

“I guess all the teams naman yun ang inaasam,” said Hontiveros, who fell short in each of the four times he made to the Philippine Cup finals, including twice with the Aces.

It was shortly after Alaska lost a 3-0 finals lead against San Miguel in the last all-Filipino conference that Hontiveros verbalized his plan to retire by the end of the season.

He later told SPIN.ph that emotions got the better of him.

“That time, emotionally drained ka na rin,” he recalled of the painful moment when the Aces lost the deciding Game Seven against the Beermen in what went down as the biggest finals collapse in the 41-year history of the pro league.

But deep inside him, Dondon is aware there’s still a few more years left in him despite his advancing age.

Turned out, the coaching staff of Alex Compton and Alaska management felt the same way about him.

“Few times will you have a chance to have a player and leader the caliber of Dondon,” said Compton of his former rival in the old Metropolitan Basketball Association (MBA). “It is a pleasure to be able to continue to have him at Alaska.” 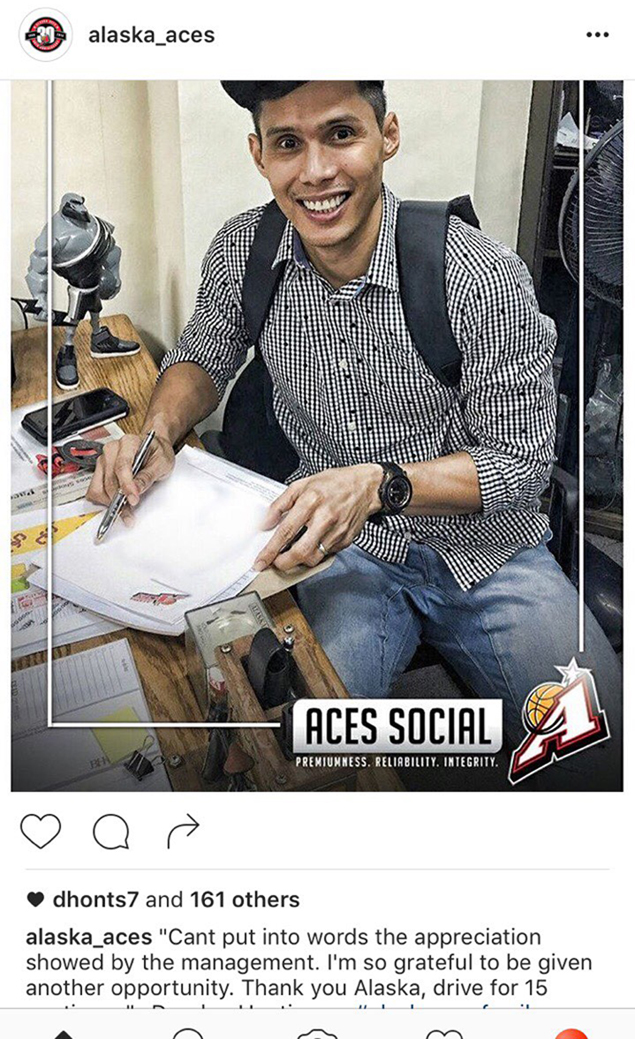 “They have nothing but good words for me,” said an elated Hontiveros, who won a championship with the franchise in 2013 (Commissioner’s Cup) and made the finals four of the last six conferences.

“Si Coach Alex muna, and then si Sir Dickie (Bachmann), and then Boss Fred (Uytengsu),” he added. “Kaya I’m very thankful to them for giving me another opportunity to play and help me in my transition into coaching.”

The Aces will start preparing for the new season by the 17th of the month, but Compton was gracious enough to give Hontiveros an added two days in his US vacation. He is set for an October 20 return instead.

After which, Hontiveros said, “it’s another year to continue working with the team.”

Compton indeed, welcomes the opportunity and hopes Dondon gets what he wishes for.

“I am praying that he can get a championship this year,” said the always amiable mentor.