A TALL, wiry man took his seat at ringside behind the basket of the Smart Araneta Coliseum on Wednesday night, sitting right next to longtime manager Danny Espiritu.

He didn't turn a lot of heads, for he was not as popular as contemporaries like, say, Kenneth Duremdes, Johnny Abarrientos or Vergel Meneses. But he's admired nonetheless by a lot of fans, more so those who appreciate defense and plain hardwork on the court.

Marzan rarely makes a visit to PBA games these days since he's now based in his native Alaminos where he serves as sports consultant to the local government and is an assistant of fellow PBA veteran Chris Calaguio in the varsity team of the Philippine College of Science and Technology in nearby Calasiao.

He also tends to his two-hectare farm land in Alaminos, which was among the properties he was able to acquire in the course of a nine-year PBA career that started with the Jaworski-era Ginebra team in 1994-95 and ended with the defunct Formula Shell squad in 2002.

The 6-2 guard, a fourth-round draft pick who rose to win the Mr. Quality Minutes award in 1995 and should've won a handful of All-Defensive Team citations, said he still plays from time to time, mostly to stay in shape and sometimes to accept invitations for legends games.

But Marzan devotes most of his time in basketball coaching kids, if not in clinics then at PCST where he and Calaguio have taken teenagers under their wings and - in just two years - turned the varsity team into PRISAA champions in Region I.

Marzan feels he has a lot to share in terms of basketball knowledge, having played under some of the best coaches in the land beginning with former PBA Coach of the Year Perry Ronquillo and Gilas coach Chot Reyes at PABL side Burger Machine, Jaworski at Ginebra, and the likes of Ronquillo, now SMB coach Leo Austria, and current PBA commissioner Chito Narvasa at Shell.

He listed one-time MVP Ato Agustin, former SMB import Lamont Strothers, and Abarrientos among the players who were toughest to guard during his time, but two players - former Purefoods star Glen Capacio and longtime SMB mainstay Yves Dignadice - left a bigger impression on him.

No wonder then that when he was asked to name a player that impressed him the most among the current players, Marzan pointed to one young man who is more or less of the same mold - defense-oriented, plain hardwork on the court, plays with all heart.

In short, a blue-collar worker.

Is Jio as good a defender as him? 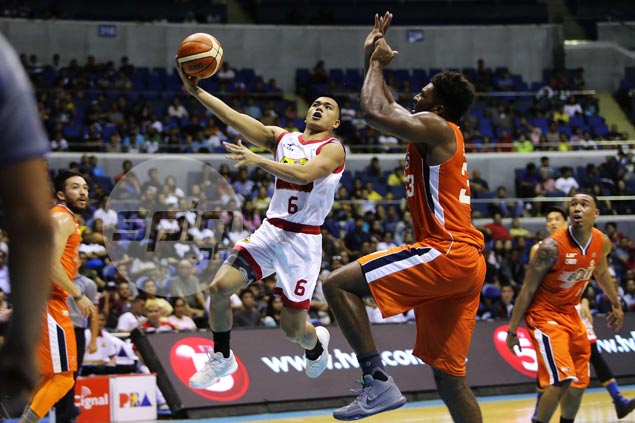