MORE than a week since a PBA selection committee came out with the '40 Greatest Players' list, the furor among fans over controversial entries in the honor roll has shown no signs of dying down.

Netizens have flooded social media and comments pages with vitriol, not so much for the players who were there but more for those who weren't - former stars named Seigle and King and Asaytono and Racela who they felt deserved a place on any 'greatest' list put up by the pro league.

The anger only grew when the omitted players started speaking up, starting with an agitated Nelson Asaytono who minced no words in expressing what he felt about his snub. Their words were like gasoline thrown into the fire.

[See That's a lot of bull, says 'The Bull' after Greatest Players snub]

The seven-man panel that made the choices wasn't spared, so much so that some members of the committee themselves soon found themselves under scrutiny, not only for the decisions they made but for their qualifications to make the decision in the first place.

The job was actually made easier for them even before they started deliberating on their choices. With members of the '25 Greatest Players' roll and 10 former league MVPs seeded into the list, committee members needed only to fill five more spots on the '40 Greatest Players' list.

How could they get them wrong, netizens wondered.

The debate, really, isn't on whether Kerby Raymundo, Chito Loyzaga, Marlou Aquino, Jayson Castro, and Marc Pingris deserved to be on the list or not; the bone of contention is on whether the five players deserve to be there ahead of the other great players the committee passed up.

To give you a better idea, here is a detailed table comparing the careers, numbers-wise, of the five players picked with the other candidates bypassed by the selection panel. It shows not just the statistics but also the championships they won in their careers as well as finals appearances and individual awards and All-Star selections garnered. 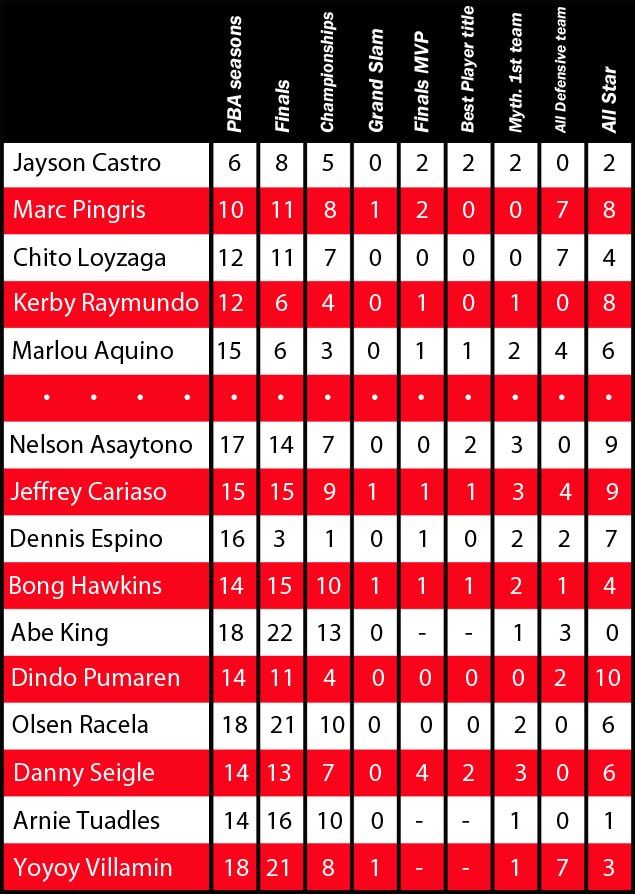 The manner in which the committee deliberated on the choices has also come under fire. The panel members sat down once, laid down the criteria then voted on a list of eight final candidates right there - all in a span of a few hours. Before you know it, one member released the list the next day without so much fanfare.

No wonder netizens soon started questioning the partiality of the committee. The haphazard selection process inevitably gave the impression that the committee railroaded the decisions.

A a result, questions abound.

Did the panel members go over the careers of each member on the shortlist of candidates one by one? Did they seek out a consensus from fans? Did they bother to even look at the numbers?

If they had bothered to look, they will also find revealing statistics like this: 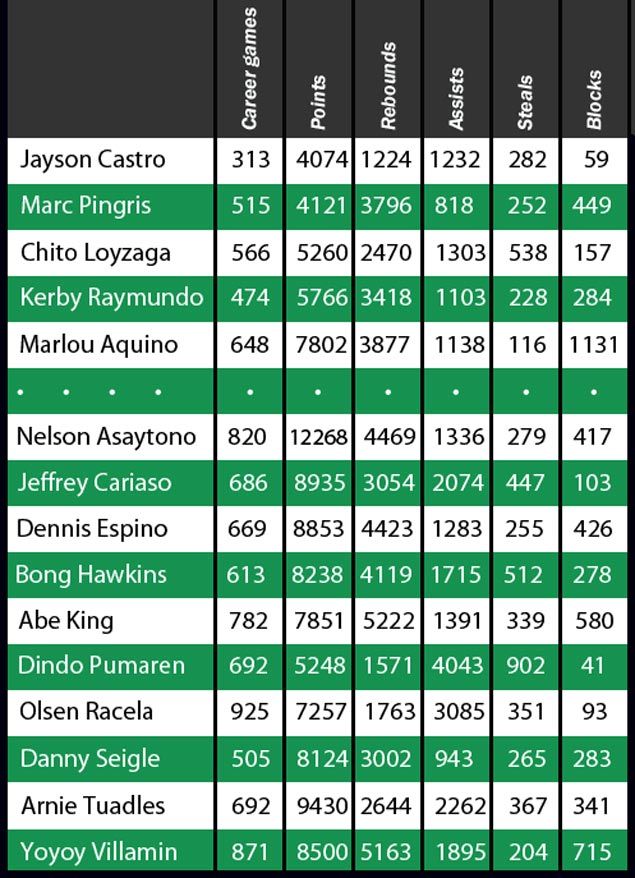 Granting the decisions on any 'greatest' list are subjective, it still would have helped if the committee pored over the numbers and took a deeper look at the final candidates' respective careers. It may not have changed their decisions, but at least it could have helped them make a more sound judgement.

Here's one example. Compare the careers of Asaytono and Raymundo and this is what you'll find: 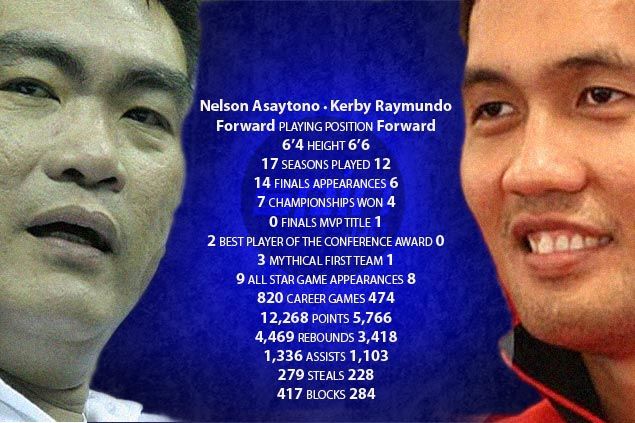 It is contentious enough that Asaytono was the only player in the Top 14 on the PBA's all-time scoring list not to make the '40 Greatest Players' list. To compare his numbers - not only the statistics but also championships and awards won - with those of another non-MVP who made it only widens the disparity.

There are those who feel that it's a bit too early in Talk 'N Text guard Jayson Castro's career to be considered for the honor. But granting Castro has done enough to merit inclusion this early, questions were raised on why he was rushed into the 'Greatest' list when there was a deserving Racela simply waiting in the wings.

Look at their career numbers: 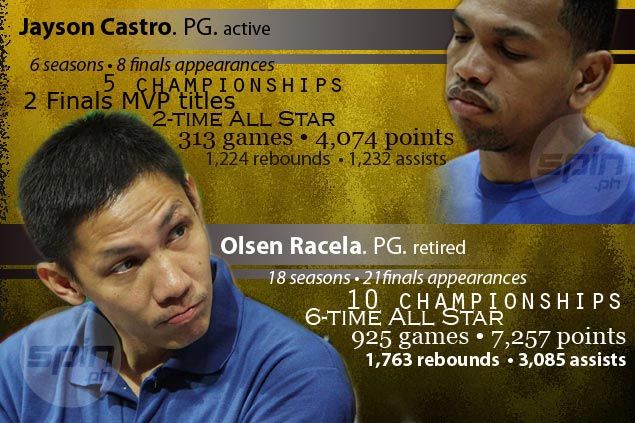 The same holds true when you compare the career numbers of Aquino, Pingris, and Loyzaga to bypassed players like King, Hawkins, Seigle and Cariaso. 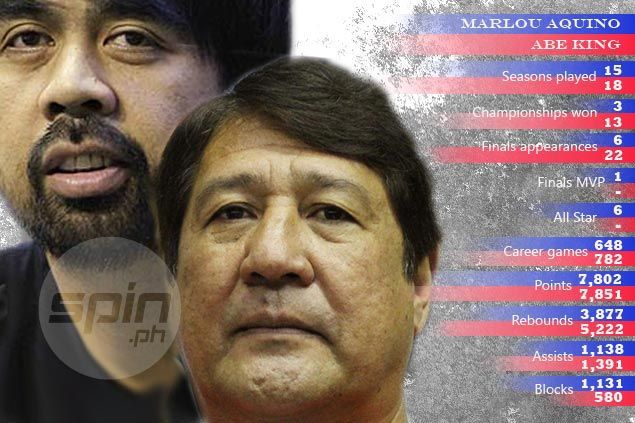 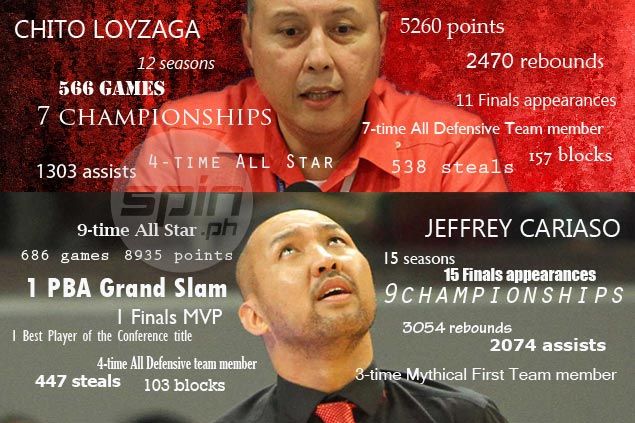 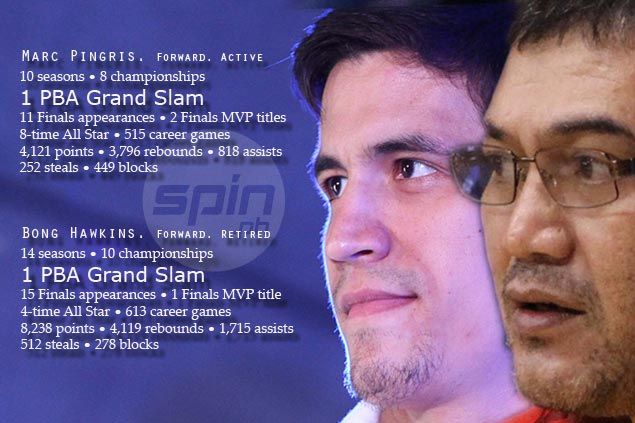 As we've said, coming up with such 'greatest' lists inevitably leads to heated debates. No matter what decisions they made, this PBA committee was bound to face hell from one player and his fans who feel he should be there.

Also, we admit that the arguments put forward in this report did not take into consideration the 'intangibles' the players brought to the table, like Loyzaga and Pingris' defense and Castro's fine performance for Gilas Pilipinas in last year's Fiba Asia championships in Manila.

But allow us to state this: Protests in this case wouldn't have snowballed if the selection was done properly.

Looking back at the selection process, it wouldn't have hurt if the PBA panel spent more time poring over the details and looking at the numbers to make better choices.