Confused on why PBA games are no longer shown on Aksyon TV 41? Here's the answer

ARE you among the fans left confused to find out belatedly that the lone Wednesday PBA game between the Rain or Shine Elastopainters and San Miguel Beermen was no longer shown on Aksyon TV 41?

According to TV5 sports manager Vitto Lazatin, the live telecast of PBA games in TV5's sister channel on the UHF band was discontinued under a new TV schedule agreed upon by the league and its broadcast partner.

The same agreement had TV5 increasing from five to seven the PBA games it brodcasts live a week, and the simulcast on Aksyon TV was removed to avoid confusion among fans, Lazatin said.

Under the plan, TV5 will carry a live broadcast of lone Monday and Wednesday matches as well as the second game of the Friday double-header, with the first game shown on a delayed basis at 11 p.m.

All Saturday and Sunday games, according to Lazatin, will now be carried live by the Manny V. Pangilinan-owned television station.

“This was what was discussed in the new proposal, which was the introduction of a Monday playing date. We worked together with the PBA to develop this new schedule,” Lazatin said.

“In the interest of viewers so it will become less confusing, we’d have it all on TV5 now that we have seven live games every week,” he added.

“It was discussed with the PBA before the conference started. It was inside the proposal when the plan was presented."

However, the new broadcast schedule, as well as the decision to discontinue the parallel broadcast on Aksyon TV 41, still left a number of league fans disenfranchised. 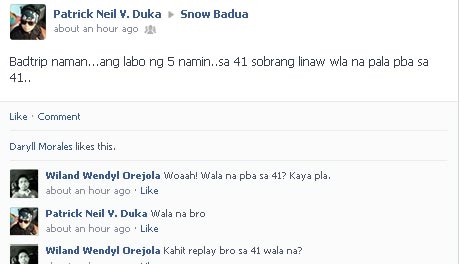