B-MEG bucked the absence of head coach Tim Cone in the second half as it stunned sister squad Petron Blaze, 104-93, on Wednesday night to all but eliminate the Boosters from contention in the PBA Governors’ Cup semifinals at the Smart-Araneta Coliseum.

With Cone getting thrown out late in the second quarter for a second technical, assistant coaches Jeffrey Cariaso, Richard del Rosario, Johnny Abarrientos and Koy Banal took charge in the second half when the Llamados came back from the depths of a 19-point deficit.

Import Marqus Blakely once again displayed his multi-dimensional game, compiling 35 points, 11 rebounds, five steals, three assists, and three blocks to lead the Llamados, who kept a firm hold on second spot behind Rain or Shine with an 8-3 win-loss mark.

“I’m retiring. They’re better off without me,” Cone joked as he entered the press room for the post-match conference.

He then gave the moment to his four assistants, who deservingly joined Cone on the podium.

“We’re talking here together because we did it together,” Cariaso said.

The win was the Llamados’ first against the Boosters in four meetings this season.

“We got frustrated early because we wanted to beat them badly,” Del Rosario said. “But the coaching staff did a good job in the second half in getting the players to calm down.”

James Yap bounced back from a scoreless stint the last time and tallied 20 points, four rebounds, and three assists, while Marc Pingris recorded a double-double of 18 and 10 boards.

The Llamados were staring at a 57-38 deficit after Alex Cabagnot made a triple with exactly two minutes to go before intermission, when Cone was ejected 17 seconds later for excessive complaining.

His ejection seemed to have fired up his squad, which cut the lead to 13 at the end of the third, tied the game at 81 after a Jonas Villaneuva triple with seven minutes 52 seconds to go in the game, and built its own double-digit lead towards the end.

“We stayed within the game plan. The only difference was we were able to execute in the second half,” Del Rosario said.

It was like deja vu for the Boosters who were just coming off a heartbreaking loss against Barangay Ginebra Sunday in a game where the Kings rallied from an 11-point deficit entering the fourth quarter.

The Boosters, led by Cabagnot’s 22 points, six boards, and six assists, are still mathematically in contention at 6-6 but their fate is no longer entirely in their hands. They need to win their last two games and hope that other teams lose to have a chance at a playoff. 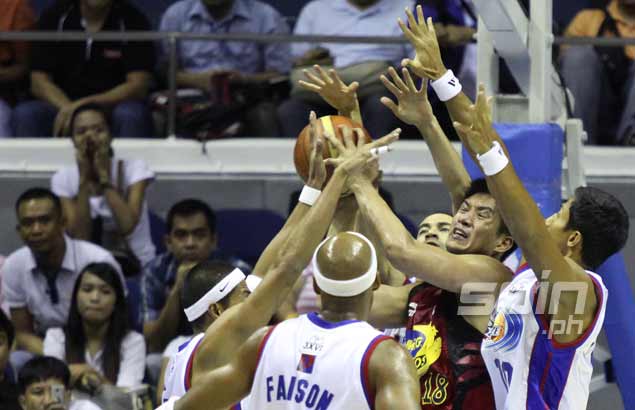