THE mere mention in the news of its application for a PBA franchise has sales of Kia Motors shooting up over the past few months.

That, Columbia Motors president Ginia Domingo said, shows the kind of impact membership in Asia's first professional cage league can have on the marketing campaign of the car company.

Columbia Motors, distributor of the Korean car in the country, is one of three companies currently undergoing due diligence as it looks to put up its own PBA team as early as next season.

Spearheading its bid is Domingo, a former member of the University of Santo Tomas' women's volleyball team who also happens to be a big basketball fan, being a fixture at ringside during UAAP games.

She is no doubt excited about the possibility of putting up her own team. 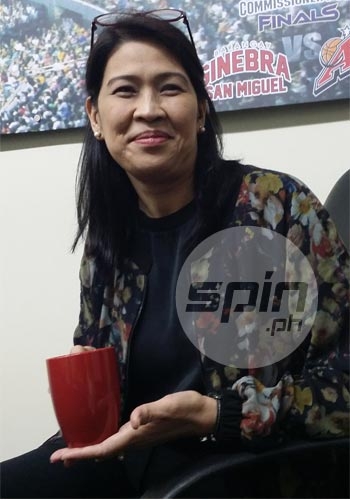 Domingo bared that if and when the PBA board approves their application, Columbia Motors is ready to maintain and sustain a ballclub for the long run.

Domingo also made it clear that the PBA application is the initiative of Columbia Motors and not Kia Motors World.

“This (application) is purely the initiative of Columbia Motors, no mandate from Kia Motors Corporation (Kia World)," she said. "But of course, they encourage all their distributors to align marketing activities with what they do internationally.

“Hindi kami nagpaalam (sa Kia World), but we know they will always support us. There are no expectations, but they will definitely help. They will not say no if we ask, but we haven’t asked - for the record,” added the former Ginia Roxas.

Kia has been a big presence in sports events worldwide, being the chief backer of the Los Angeles Clippers in the NBA as well as other marquee events like the Australian Tennis Open and the football World Cup.

Locally, Kia is one of the supporters of the Azkals national football team.

“Kia wants its distributors to focus on sports and what’s the best way of getting involved in sports here in the Philippines than through the PBA,” Domingo said.

“We’re with the Azkals, but still PBA is the best venue for us to expand in as far as our marketing is concerned,” added the lady executive.

Asked if Kia's marketing thrust fits the mass appeal of the league, Domingo responded: ‘I think, we can reach out to the PBA fans, kasi yung mga cars namin masses ang appeal eh, the Picanto and the Rios. When you speak of the masa, PBA yun.’

And why were they very secretive about their PBA application after news first broke out?

“Wala pa kasi kaming pwedeng sabihin, ang ginawa pa lang namin ngayon is write a letter of intent. We’re waiting for the PBA board of governors to meet and Commissioner Chito Salud is doing their diligence.

“Kaya andito kami ngayon nangungumusta, and ang understanding namin is we still have to wait a bit of time, mga April or May and we’ll find out what the board will say,” she said.

Asked if they are ready to take on some of the biggest companies in the land like the San Miguel Corporation and the Manny V. Pangilinan group in the pro league, the fighting spirit of a Lady Tigress in Domingo came out.