WHEN then Perpetual Help assistant coach Tonichi Pujante was scouting for talent at the Palarong Pambansa several years ago, his attention was instantly caught by someone who reminded him of an illustrious teammate.

In an interview with SPIN.ph via Viber, Pujante, now the founding commissioner of the Vietnam Basketball Association, shared his recollections when he first saw a player from the team representing Region XI - a kid from Davao del Sur with the unique name of Scottie Thompson.

“I was with my wife and partner and we were scouting the Palarong Pambansa. When I saw Scott he reminded me of Samboy (Lim). Both were tall and skinny. And like Samboy, Scott could sky! He could fly!”

Pujante, of course, knew what he was talking about.

A former captain of the Letran Knights men’s senior basketball team, he and 'The Skywalker' were teammates on the illustrious squad that won three straight NCAA basketball championships from 1982 to 1984.

According to Pujante, what immediately stood out from the 6-1 guard were his athleticism and basketball sense.

This assessment convinced Pujante to offer Thompson a scholarship to play for Perpetual Help.

The kid named after Chicago Bulls star and Hall of Famer Scottie Pippen - a player known for his versatility and unselfishness - proved he shared the same qualities as his namesake during his time in the NCAA, regularly dishing off triple doubles with the Altas.

Despite his busy days in growing a new sport in another country, Pujante said he has kept track of his former players but has consciously kept his distance.

“(I keep tabs on my former players) pero I don’t interfere with their business dealings because in my position, there might be a conflict of interest. But when they approach me, I give them advice,” the former Knights star said. 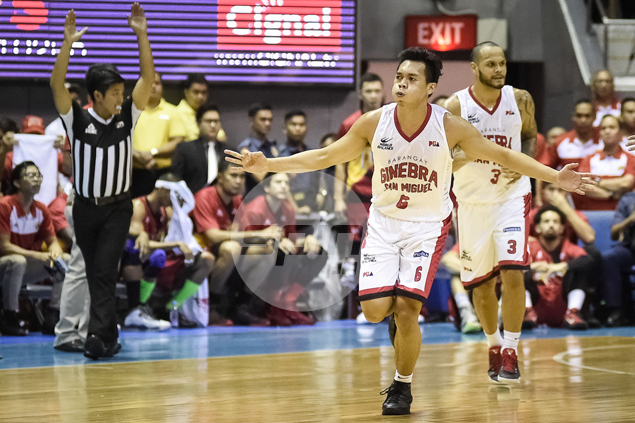 When Barangay Ginebra selected Thompson as the fifth overall pick in the 2015 PBA draft, his former mentor readily knew he would be given a chance to shine in the pros.

“Alam ko na when sumampa siya sa PBA and kinuha ni (Ginebra coach Tim Cone) who gives players a break - it's how you manage it and use it. Scott made the most of it.”

Pujante said he was confident his former player would do good, since Thompson not only absorbed his lessons on the court but the life skills Pujante also shared to the players under his wing.

“With Scott I know his work attitude as a hard worker. Walang bisyo 'yan. Ang hilig lang niya kumain at mamasyal. Disiplinado. His mind is set on something.”

Asked how he felt with the Ginebra rookie’s performance in the recently concluded PBA Governors’ Cup, where the popular team won its first title in eight years, you could sense Pujante’s pride from across the sea.