GILAS Pilipinas coach Tab Baldwin has given the national pool members who participated in the concluded PBA Commissioner’s Cup Finals five days to rest, expecting them to suit up in practice by Tuesday.

Rain or Shine standouts Paul Lee, Gabe Norwood, and Jeff Chan, and Alaska stalwart Calvin Abueva are coming off a grueling title series that saw the Elasto Painters emerge victorious, capped by a 109-92 win in Game Six on Wednesday night.

“Five days off is a good amount of time to rest your body and, more importantly, rest your mind after a tough series,” Baldwin said a day after the title-clinching game. “We need to give them that time. I’d love to have them right now, but it’s not fair.”

Once they do report for practice, there’s no need to bring them in slowly, Baldwin said.

“They’ll hit the ground running,” he said. “I don’t think we have to worry about them. They’re in shape.”

For now, Baldwin is making the most of the players who are in attendance. Eleven players were present in practice on Thursday afternoon.

“We’re just trying to make progress with the guys we have here, get them into shape, and that’s what we did today,” Baldwin said. “I feel comfortable that we progressed today.”

Baldwin excused Troy Rosario, who is also suiting up for the Cadets side vying for top honors in the Southeast Asian Basketball Association championship in Thailand.

Marcio Lassiter, on the other hand, is still recovering from a “leg problem.”

“But he should be fully practicing on Tuesday according to the message we got,” Baldwin said of the San Miguel Beer sniper. “But hopefully we’ll see him Saturday or Sunday.”

Gilas will have a day off on Friday before plunging back to practice on Saturday. 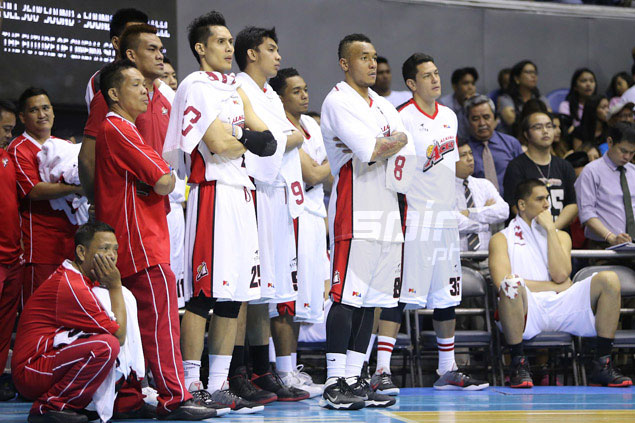