Ross feels Brownlee should've been called for offensive foul, but quick to move on

CHRIS Ross felt Justin Brownlee should’ve been called an offensive foul in a crucial late play, but quickly moved on after San Miguel Beer suffered a 107-99 loss to Ginebra in their PBA Commissioner’s Cup matchup.

Off an SMB turnover, Brownlee led a fastbreak then launched for a layup over an outnumbered Ross, who was called for a foul with exactly two minutes left even if successes replays showed the Ginebra appearing to ward off the Beermen guard in the play.

Ross complained about the call but officials refused to budge, slapping him with a technical foul instead.

LA Tenorio buried the technical free throw before Brownlee converted his two charities to give the Gin Kings a 98-90 breathing room, effectively putting an end to the SMB comeback.

“I mean, the refs can only do so much, it’s fast paced,” he was quick to add. “I guess they can go back and watch film, and correct it.”

Instead of Brownlee being called for his sixth and last foul with the Beermen only down by five points and ball at hand, Ginebra went up by eight and never looked back. 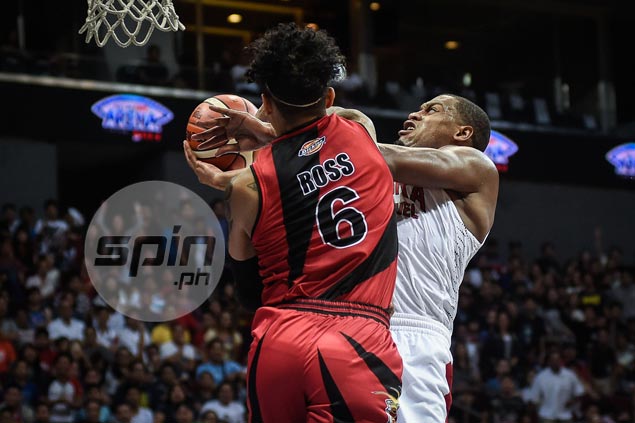 “It was tough for us because we were getting into our groove,” Ross said. “Instead of us getting the ball down one possession they had the ball, they go up two possessions, tough break of the game.”

But Ross, who contributed seven points, nine assists, two boards, two steals, and just one turnover in 38 minutes as a starter, refused to label it as the turning point of the game.

“I mean, you never know what will happen,” Ross said. “There were still a couple of minutes left in the game, like I said, I felt we were in the momentum, but you don’t lose the game off one play, you don’t win a game off one play.”