CHRIS Newsome found it strange going up against good friend Greg Slaughter as both seek a first ever PBA championship in the Governors Cup finals rematch between Barangay Ginebra and Meralco.

Ironically, the two find themselves in a fight for the Best Player of the Conference award.

Three-time MVP June Mar Fajardo and Jayson Castro are currently 1-2 in the race, but the battle could end up as a two-way fight between Newsome and Slaughter after their respective teams advanced to the championship round of the season-ending meet for the second straight year.

Newsome could only break out into a wide smile when asked about his thoughts on contesting the BPC award with Slaughter, a fellow Atenean who was among the first to take him under his wings when the league’s Slam Dunk champion was just a newbie in the country.

“It’s kind of surreal that we're drawn into the finals and the Best Player award against each other,” said the Meralco sophomore.

Newsome and Slaughter never got to play together at Ateneo as the 27-year-old guard came on board just after Slaughter had played his final season with the school.

But they got the chance to bond in Katipunan, with Slaughter serving as a brother figure to Newsome the first year he was with the Blue Eagles.

“He was one of my first mentors when I first arrived in the country,” Newsome disclosed.

“He was one of the guys who I always looked up to and always asked any kind of questions like what it’s like to be part of the Blue Eagles community, just because it’s different where I came from,” said Newsome, who initially played college ball at New Mexico Highlands University before transferring to Ateneo.

“And Greg was one of those guys who I turn to for advice.” 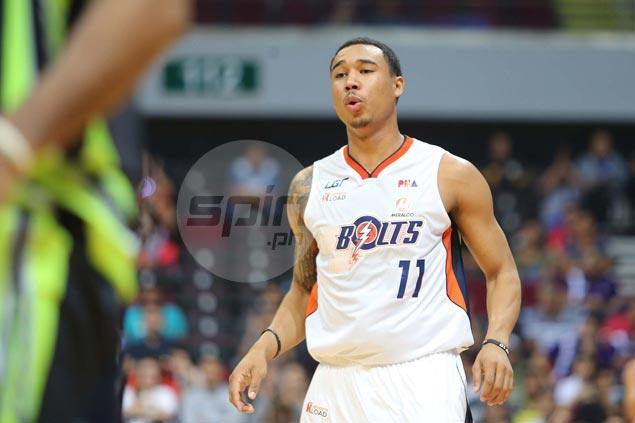 Like the Ginebra big man, Newsome said he’s more focus on helping the Bolts win a first ever PBA championship in franchise history. Bagging the BPC award would just be a mere bonus for him.

“It’s an honor to be considered as one of the top frontrunners for the Best Player award. Being considered as a frontrunner is a confirmation that I am playing the type of basketball that I should be playing,” said the former Rookie of the Year.

That’s what both Newsome and Slaughter will try to do beginning on Friday when Game 1 of the best-of-seven title series kicks off at the Quezon Convention Center in Lucena.

The Bolts and Kings first met in the finals last year when Ginebra ended an eight-year title drought by finishing Meralco in six games behind import Justin Brownlee’s dramatic three-pointer from the top of the key at the buzzer.

Unfortunately, Slaughter just watched the action from the bench as he was still recovering then from an ACL injury he suffered in the mid-season.

But now that he’s back in shape, Newsome welcomes the opportunity to go up against his friend with no less than a championship at stake.

“Of course I wish he was here last year. We actually talked about that hopefully we can meet again (in the finlas) when he’s already playing,” said Newsome.

“Now that opportunity has come.”