Chot Reyes breaks silence on criticism over Asiad letdown, infamous own goal, and his future as Gilas coach

CHOT Reyes broke his three-week silence on the micro-blogging site Twitter with defiant words quoting Theodore Roosevelt, then stood firm as he finally responded to questions about a tumultuous Asian Games showing that saw the Gilas Pilipinas coach come under fire from critics.

Speaking to Spin.ph for the first time since coming home from Incheon, South Korea following Gilas' woeful seventh-place finish in the Asiad, the controversial national coach admitted he was taken aback by the 'hatred' directed at him but at the same time recognized that criticism comes with the territory.

"I'm surprised by the intensity of the hatred, but the criticism I can take. I have no problem with that, it's part of the job," Reyes said in a telephone interview he granted to Spin.ph on Monday night.

"But I'm happy that Gilas has been able to rekindle the interest in the national team, ignite the passion for basketball. And part of that passion is anger. So kung dati wala ng pakialam, I'd much rather prefer that the fans care a lot about our national team."

Reyes didn't hide the fact that the criticism has affected people close to him but insisted that he can take it if it was him alone, although the tone of his voice betrayed him at times during the interview.

Still, he was even able to joke about the national team's 'history-making' saga over the past two years, from a first Jones Cup title since 1998 to a second-place finish in the Fiba-Asia championships to a first win in the World Cup in 40 years down to the worst finish by a Philippine team in an Asiad.

"Lahat 'yon, we made history," he chuckled.

Reyes was reluctant to talk about the stunning events that unfolded in Incheon and soon turned some fans against him, going off the record at times. The last thing he wants to do, he said, is open old wounds and start a back-and-forth debate with his fiercest critics.

[See Fernandez steps up tirade, says Reyes should focus more or basketball and less on self-promotion]

However, the Gilas coach denied that he put so much focus on the Fiba World Cup that he took the Asian Games for granted.

"On the contrary, the Asian Games was our main preoccupation," he said. "But one thing I learned is that it is very difficult to do well in both the World Cup and the Asiad back-to-back, especially if you go into them with vastly different teams." 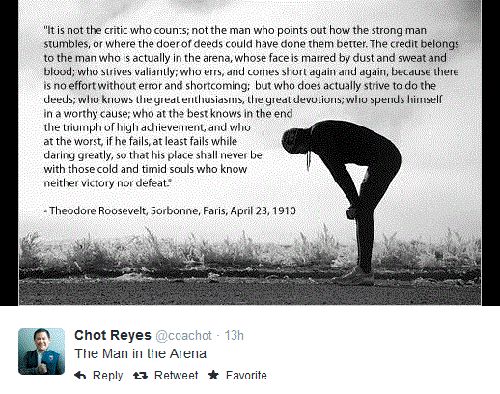 He also took exception to accusations that the team and its officials were remiss in brushing up on the eligibility rules of the Asian Games, which critics claimed led to the disqualification of naturalized player Andray Blatche for failing to comply with residency requirements.

"You can see all the emails we sent to organizers seeking clarification about the eligibility of Blatche months before the Asian Games," the multi-titled coach said. "But (organizers) didn't come out with a decision until we came back from the World Cup, which was just a week before (the Asiad)."

[See Reyes rips into Douthit, accuses naturalized player of quitting on Gilas in loss to Qatar]

The Gilas coach declined to delve into his tirade against Marcus Douthit and his subsequent benching for the Korea game, merely pointing to admission by some players that it was them who got angry at their naturalized player inside the dugout after the loss to Qatar.

On the infamous 'own goal' Gilas tried to score against Kazakhstan to force overtime in a game it needed to win by at least 11 points, Reyes said sorry to fans who felt Gilas disrespected the game but insisted they were merely out to win a game under the parameters of the rules.

"Look at Kazakhstan, they airballed two free throws to lose (that game)," he said. "Tayo, we didn't shoot (an own goal) to lose. We were out to win by 11 points under the parameters of the rules.

"But if we offended the sensibilities of others because of that, I'm sorry. We were not disrespecting the game."

As for his future with Gilas, Reyes said he is leaving it up to the Samahang Basketbol ng Pilipinas (SBP) and its chairman Manny V. Pangilinan as well as the PBA board, which has indicated in recent weeks that it wants a bigger say in the national team program.

"I serve at the pleasure of the SBP, our chairman, and the PBA board," he said. "It's up to them. I will abide by whatever they decide on."

Asked to sum up the roller-coaster experience and what he had learned, Reyes went back to an oft-repeated line about people trying to do great things running the risk of 'great failures.'

But more than anything else, Reyes said he was heartened by the show of unity of the Gilas players.

"I know that we did our best and achieved the targets we set out to do," he said. "I (also) learned how solid the players are, and I've learned that our relationship remains strong.

"Everything else, I have no control of. It is what it is."