A VETERAN coach who also acts as manager of PBA rookie Roi Sumang has reacted to posts on social media by GlobalPort team owner Mikee Romero.

Sumang’s manager, Lawrence Chongson, told Spin.ph the former University of the East star has been left disheartened after reading comments posted on Facebook by Romero, who, of late, has taken to the social networking site to make revealing comments and 'blind items' about his players and team.

In his post last Tuesday, the outspoken Romero wrote: “1 rookie of Globalport will be dropped to the reserve list, after watching the game vs Meralco and being stolen the ball twice. This player has to get first more experience in the PBA Dleague”

Not yet done, Romero even put in a hashtag that went: "#NOTyetREADYforTHEPBA."

He also dropped in a 'clue:'

Chongson, who also coaches Tanduay in the PBA D-League, said it was obvious Romero was referring to Sumang, who was taken by GlobalPort in the third round of the last rookie draft and has since been dropped to the reserve list.

Chongson, who also handles the career of Rain or Shine star Paul Lee, said Sumang was hurt upon reading the post.

Romero had also previously posted on Facebook a comment hinting at a looming trade for another GlobalPort player.

[See Joseph Yeo on the trading block yet again?]

Contrary to what Romero said, Chongson said there was no doubt that Sumang can cut it in the pro league and only suffered the misfortune of landing in a team loaded with stars in his position. 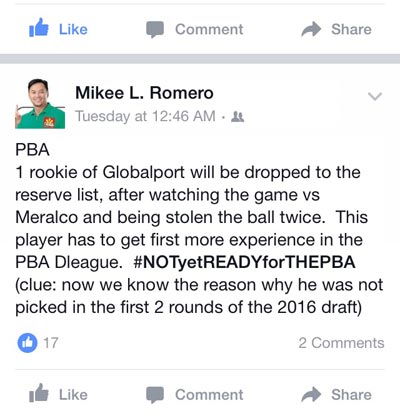 Asked about the surprising actions of Romero, who is the only PBA team owner who criticizes his players on social media, Chongson groped for words.

Still, Tanduay's head of basketball operations said he owes Romero and the Globalport organization a debt of gratitude.

Asked if there are teams already inquiring about Sumang, who is now on the reserve list of GlobalPort, Chongson nodded.

“Merun. Madami. Kaso nagtanong ako sa PBA, nasa protected list siya eh kaya hindi rin ako makagalaw,” said Chongson, who hinted that the team that Sumang needs to be able to come out of his shell is Rain or Shine.