COLUMN: Can Magnolia still turn PBA Finals around? Don't count on it

CHICAGO - Four games into these PBA Finals. there are no more surprises left and all the wild cards have been dealt.

TNT will win the title and end an arid six-year drought.

You'd have to be either blindly loyal to Magnolia or a stubborn optimist to not believe that.

With a commanding 3-1 series lead, the Tropa Giga are simply too good and the Hotshots just couldn't keep pace. Game 4, for instance, was a 24-24 affair at end of the first quarter and quickly turned into a 57-39 blowout by halftime.

Constantly playing uphill against a run-and-gun loving team with a plethora of outside shooters has finally worn down Magnolia, which has been creamed by a total of 47 points in their three defeats.

In some ways, Hotshots coach Chito Victolero sees it that way as well.

"The strength of our team is our energy and our multiple effort on both ends of the floor. There was a point in Game 4 where we couldn't match their energy and their effort, especially in the second quarter where we had 12 turnovers that TNT converted into 18 points," he told me over the phone.

Wounded, but not mortally, not yet anyway, the Hotshots hope to deliver a little more fight, a little more pride in tomorrow's Game 5. 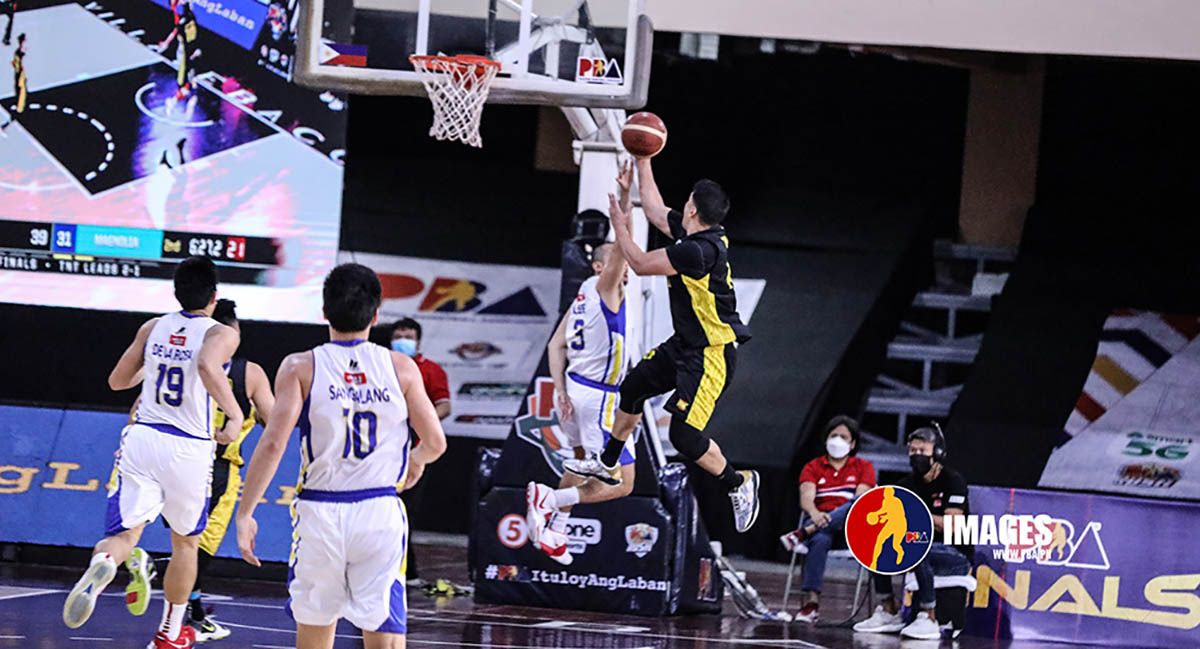 It appears that all of Magnolia's maladies - lack of focus and execution on offense, impatience on defense, and general carelessness - are all correctable flaws.

Is a turnaround is doable?

Of course, all series are. But I'm afraid the Hotshots are running out of games.

I still believe coach Chito is a shining star in this league who will collect many championships in the years to come. He just can't count on this conference.

TNT MEANS TOUGH AND TESTED. One of the factors that gave Magnolia an edge in this series was their toughness, which Calvin Abueva epitomized with his in-your-face bravado.

The Tropa haven't exactly out-toughed the Hotshots. That's not in their DNA.

But I am amazed at how they have not backed down and cowered in the face of Magnolia's physicality.

Troy Rosario is a beast, a dude who ignored the pain of a spinal shock and a broken finger while suiting up in Game 4. And Ryan Reyes is a guy you want to walk with in a dark alley.

Heck, even Roger Pogoy, a deadshot with a choir boy's demeanor, belts out a nasty snarl once every unfavorable whistle.

Magnolia's guard-play was supposed to give TNT's backcourt some hell.

That appears more like a harmless theory now as Mikey Williams has been target-shooting at their expense.

After a 39-point exhibition in Game 3, the rookie sharpshooter swished 9 of 15 baskets including 3 of 4 threes for 26 points in Game 4.

If he shoots like that in Game 5 - 60 percent from the field and 75 percent from beyond the arc - Magnolia has no chance.

Williams, who was wildly erratic in the semifinals against San Miguel, has found his groove and when deadly shooters like him get into that comfort zone, there really is pretty much nothing the other team can do.

After his team sat on a 3-1 advantage on Wednesday, on the verge of something special, I texted coach Chot Reyes to tell him this was probably "one of the rare nights" that he is going to sleep well.

"Tonight? Don't count on it," he replied.

Either this Friday or on Sunday, coach Chot won't sleep well, either.

He has a victory party to go to.