That's the burning question entering the final stretch of the PBA's 41st season as far as individual awards are concerned, with the familiar sight of the 6-foot-10 big man once again standing tall against a host of contenders for the league's highest honor.

Unless some other player comes up with an extraordinary performance in the season-ending Governors Cup, expect the mild-mannered San Miguel slotman from Pinamungahan, Cebu to walk away with his third MVP award before he turns 27 on November 17.

No other player in the league - not even four-time MVPs Mon Fernandez and Alvin Patrimonio - has won the award three successive seasons. An MVP at the end of this campaign will bolster Fajardo's growing reputation as one of the finest big men the league has ever seen.

At this point, it's hard to bet against Fajardo winning the top individual honor.

The Gilas Pilipinas mainstay is an automatic candidate for the MVP by virtue of his Best Player of the Conference award in the Philippine Cup. The championship the Beermen won in the all-Filipino conference can only serve to validate his claim on the honor.

Fajardo is also not sitting around waiting for the MVP trophy to land on his lap. He currently leads all locals in rebounding in the Governors Cup with a 12.143 per game average through seven games and is second only to GlobalPort's Terrence Romeo in scoring with a 21.6 clip.

[Note: Latest MVP rankings won't be released until the end of the Governors' Cup eliminations]

Although Fajardo is the clear favorite for the honor, that doesn't mean he is lacking in pursuers.

Calvin Abueva, at this point, appears to have the best chance to deny Fajardo another MVP award. The do-it-all Alaska forward is also an automatic candidate for the honor after winning the Best Player of the Conference award in the Commissioner's Cup and is likewise having his most impressive season in a four-year pro career.

However, Abueva's shot at a first-ever MVP award is endangered by Alaska's floundering campaign in the Governors Cup, where the Aces are at 3-5 (win-loss) and struggling just to make the eight-team playoffs.

'The Beast' missed two games in the Governors Cup so far but has done well in the games that he played, running eighth in scoring among locals with a 14.0-point average and third in rebounds with 8.0 a game.

But again, his chances appear to hinge on Alaska's campaign in the season's final tournament. 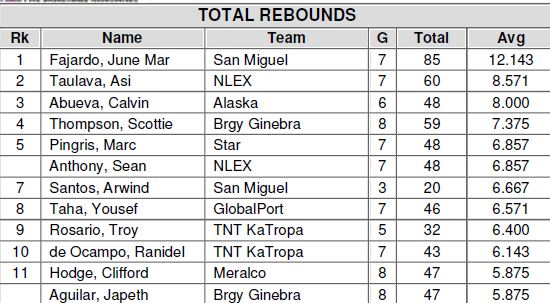 But like Abueva, Castro, Romeo and Pringle need their teams to make a serious run in the Governors Cup to enter the MVP picture.

A darkhorse is Ginebra slotman Greg Slaughter, who has crowded Fajardo in the statistical race all season. If he can come back in time and play in at least 70 percent of Ginebra's games this season, expect 'Godzilla' to be among the MVP candidates at season's end.

But again, the race may boil down to the final stretch of the Governors Cup, more so since the MVP voting will be done during this stretch. Remember, statistics only account for 40 percent of the MVP tally, with 30% coming from media votes, 25% from players' votes and the other 5% from the vote of the Commissioner's Office.

Remember also that voters, traditionally, have short memories, usually giving their nod to the player who made the biggest impression late in the season. As far as the MVP balloting is concerned, last impression lasts.

But whether we like it or not, this MVP race is for Fajardo to win or lose. 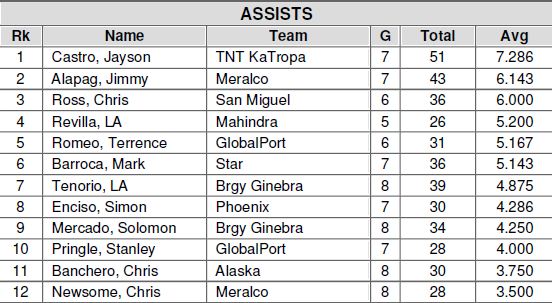