THERE’s no doubt that a healthy James Yap is as deadly as ever.

And if he continues to be in full fitness, Rain or Shine coach Caloy Garcia has no doubt Yap can reprise his ‘Big Game’ days with Purefoods, this time with the Elasto Painters.

Finally given a run-out by Garcia in the pivotal quarter of the Elasto Painters’ PBA Commissioner’s Cup game against NLEX on Friday, the two-time league MVP caught fire in the stretch run and led the team to a 113-105 win at the Smart Araneta Coliseum.

Yap finished with a team-high 26 points - his highest output in a Rain or Shine uniform and his best offensive game over the last three seasons.

Garcia was elated seeing the fire back in Yap’s eyes.

“It’s nice to see James Yap back. Basically, last conference medyo may pressure not only on him, but also on me in using him,” said the soft-spoken mentor, who came under fire during the Philippine Cup for his refusal to field the 34-year-old gunner during crucial stretches of the game.

The move, according to him, was more on trying to protect the health of the former University of the East star, who underwent a knee procedure prior to his debut game for the Elasto Painters.

“I felt last conference, his knee wasn’t that good yet,” said Garcia.

But a healthy Yap showed up the moment Rain or Shine began its preparation for its title defense this conference, even attempting to dunk the ball several times in practice. 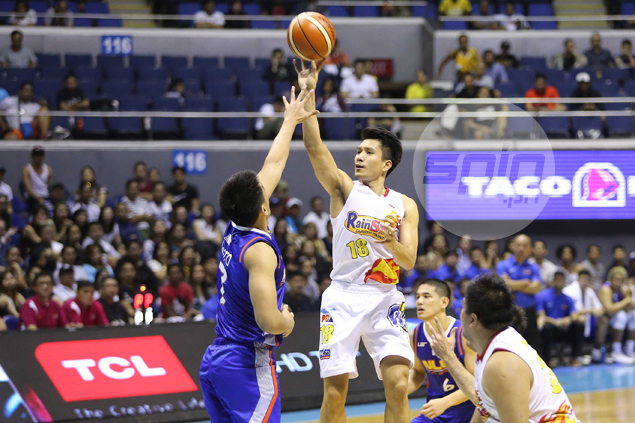 The good form carried over into the team's first game in the midseason conference.

Yap played 28 minutes – his most as an Elasto Painter – and went 9-of-15 from the floor, including 5 of 11 from three-point range. He also had three rebounds.

“During the off-season, medyo maganda yung takbo niya sa practice, he was working hard, he comes in early, and shoots the ball,” Garcia shared during his post-game interview.

“I just hope he’ll be healthy. If he’s healthy, then he’ll be the old James Yap,” said Garcia.