Call for review of PBA '40 Greatest' list mounts amid fans fury over snub of Danny Seigle and Co.

TWO days after the list of the PBA '40 Greatest Players' was released by a selection panel, fans are still in an uproar, primarily because of names like Danny Seigle who they felt should've been on it but weren't.

Seigle, a former rookie awardee and a six-time champion with San Miguel Beer, didn't hide his disappointment over the news that he wasn't on the elite list, but was gracious enough to accept the decision of a seven-man selection committee led by Robert Jaworski and Freddie Webb.

“Am I disappointed I didn't make the cut? Who wouldn't be? It's an enormous honor to have that under your belt. I guess it's my fault I didn't win an MVP, because then I would've been a shoo-in,” Seigle, 38, said in a statement he sent to Spin.ph late Wednesday night.

A lot of fans, however, were not as gracious as Seigle, turning to social media networks to air their anger over the manner of the selection and the final choices made by the selection committee.

One fan has even dedicated his Twitter account to the clamor to put Seigle on the list. Andrew Francisco, A Rain or Shine fan who goes by the Twitter handle @best1nDworld, said he believes a review of the '40 Greatest Players' list is in order.

The active Twitter critic also questioned the procedure of the nomination and selection, which was carried out on Monday afternoon by the committee at the PBA office in Libis, Quezon City.

And in this digital age, Francisco, who also felt Nelson Asaytono should've been on the elite list, said the committee should have at least considered the voice of the fans.

Apparently, a lot of tweeps share Francisco's sentiment. Here are other tweets from fans: 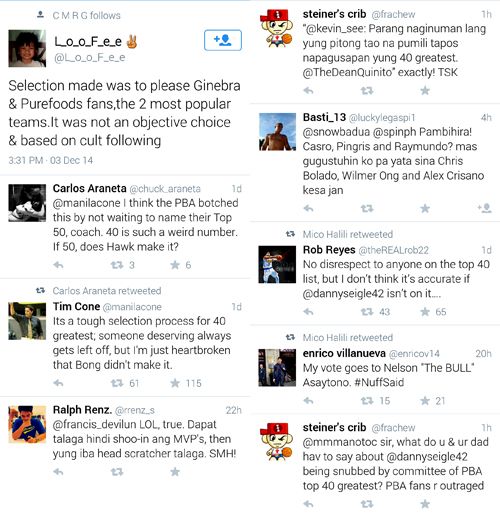 A spot on the '40 Greatest' list would have been the crowning glory for the year for Seigle, who last October was inducted into the Wagner College Athletics Hall of Fame after ending his career as the sixth all-time leading scorer at the NCAA Division I school and a two-time all conference first-team member.

“Last October, I was inducted into the Wagner College Athletics Hall of Fame & it would've been great to cap my year with a slot in our league as well,” said Seigle.

Seigle, however, insisted he only has respect for the selection committee and the choices it made.

“I do want to thank the committee for their consideration and I respect their decision,” he said. “Playing the game I love, being part of our national team and knowing my contributions did help win championships for my respective franchises will always remain the most rewarding for me.

“And in doing so, I hope I was able to make the fans happy in my own small way, by bringing excitement and a different facet of game to Philippine basketball.

“There are many incredibly talented players in the PBA deserving of this recognition and ultimately the outcome is based on a subjective process,” he said while congratulating the newest members of the PBA’s elite list.

“Congratulations to my peers for being chosen as part of the 40 PBA greatest players, especially to my very good friends. I'm really happy for them.”

Seigle said he found succor in the messages of support from fans and friends who felt he should be a shoo-in on the honor list.

“I can’t thank them (fans) enough. Their support over the years has always gotten me through tough times. It’s an awesome feeling to be appreciated by the fans… I love them!”

“The fans tweets, comments and sentiments are my consolation. They are greatly appreciated,” he said.