IT seems Freddie Roach's plea to keep global boxing icon Manny Pacquiao away from harm on the basketball court has fallen on deaf ears.

Spin.ph has learned that when the eight-time world boxing champion makes his debut in the PBA on Sunday against the Blackwater Elite, enforcer Ogie Menor will have the task of defending the Kia playing-coach.

The former San Beda Red Lion has figured in a number of fights with Gary David, Sol Mercado, Paul Lee, Ryan Arana, Rain or Shine coach Yeng Guiao and even former Meralco import Mario West in a career marked by a couple of summons from the Commissioner's Office.

Now he will has been handed the job of guarding Pacquiao, who will take a break from his training with Roach for the November fight against Chris Algieri to suit up in the match pitting the league's two newest teams - a fact confirmed by Blackwater coach Leo Isaac.

Isaac admitted Menor has the tendency to retaliate when hurt, but said it's all in the past now. 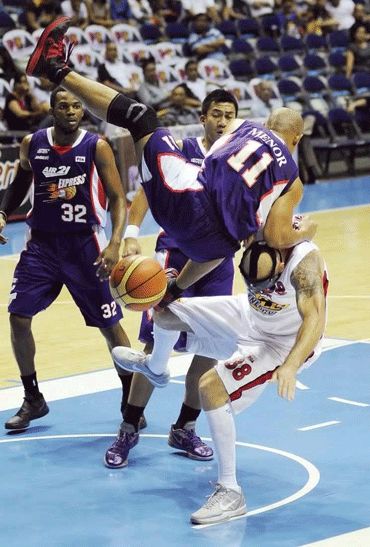 Asked about Roach's plea ‘not to hurt Manny,' Isaac shook his head.

For his part, Menor vowed to apply pressure on Pacquiao.

But if given a choice, Menor, who is a mixed martial arts practicioner, said he would rather not guard Pacquiao.

Meanwhile, Blackwater team manager Johnson Martines has assured that Menor has showed maturity during his time with the team and is no longer as temperamental as he was before.