Brickman, Gray officially out as PBA draft class trimmed to 86

EIGHTY-six is the final count of applicants for the upcoming PBA Rookie Draft as the league released its full list on Monday.

Eleven names were scratched from the 97 who submitted their applications last Jan. 27, 10 of which Fil-foreign applicants who allfailed to secure the necessary documents proving their Filipino citizenship before Friday's deadline.

Among the notables who won't be part of the draft exercise are prospective first- rounders Jason Brickman, Jeremiah Gray, and Taylor Statham.

The others who missed the cut were Brandon Ganuelas-Rosser, Tyrus Hill, John Paul Gulfo, and Christopher Cancio, while Fil-foreign applicants JJ Espanola, John Paul Zarco, and Ezra Ocampo, as well as University of Batangas' Neilowen de Jesus have rescinded their applications.

Still, the field remains formidable with Joshua Munzon and Jamie Malonzo leading the cast for the draft proper on Sunday.

Meanwhile, William Navarro, Jaydee Tungcab, Jordan Heading, and Tzaddy Rangel will all be picked in the first four selections in the special Gilas round, to be loaned to the national team pool.

With the deductions, the 2014 class remains as the largest draft field in league history as the Stanley Pringle-led draft netted 91 hopefuls. 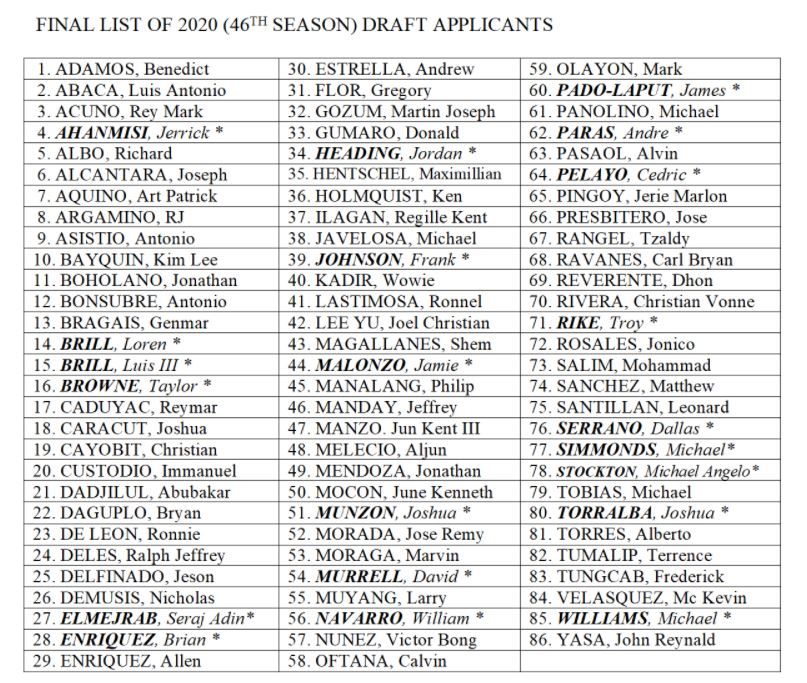