AS the drama unfolded on the GlobalPort bench on Sunday night, there was one party interested to know how the scene would play out.

Blackwater team owner Dioceldo Sy admitted he has always liked Stanley Pringle and will be more than ready to sit down with GlobalPort officials on a possible deal in case the team is willing to negotiate.

Pringle and GlobalPort coach Franz Pumaren figured in a shouting match during a huddle in its Governors Cup game against Ginebra on Sunday night in an incident that played out before a good-sized crowd at the Smart Araneta Coliseum.

The two would later be seen shaking hands prior to the start of the third period, although SPIN.ph learned from sources that Pringle stormed out of the dugout during the halftime break.

Pumaren also tried to diffuse the tension after the game by telling reporters the spat was no big deal.

There are no indications on what GlobalPort plans to do at this point, but there is definitely one team that is willing to listen.

“The team is very much interested in Stanley,” Sy said. “We’re not out to rub salt on the wound, but we’re just making known our need for Pringle.” 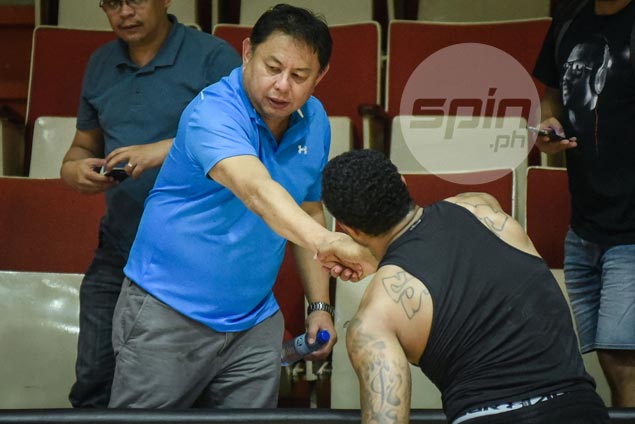 Sy, of course, knows he will have to give up a lot if he hopes to get his hands on the 30-year-old Fil-American guard, the top pick in the 2014 rookie draft and a Rookie of the Year awardee.

“We’re willing to trade our first-round pick in the coming draft for Pringle,” Sy curtly replied.

Although the season is still not over, the Elite are on track for a Top 3 pick in the 2017-18 draft after failing to make the playoffs in the league’s first two conferences. They are currently 0-3 in the season-ending meet.

Sy is even willing to sweeten the pot by adding this year’s top pick in the regular draft, Raphael Banal, added to the deal for the Batang Pier’s Jonathan Gray.

“All of these are just suggestions. Things can change in the negotiating table,” said Sy. “I just want to rebuild the team as soon as possible.”

Blackwater has netted the likes of Art dela Cruz and Mac Belo in the last two rookie drafts, but injuries to both players – and others in the team – have hampered the Elite’s campaign this past seasons.