JUSTIN Brownlee put himself in PBA lore on Wednesday night when he hit a buzzer-beating three-pointer in Game Six to lift Barangay Ginebra over Meralco for the 2016 Governors’ Cup crown.

What made Brownlee’s shot even more special was it ended the eight-year title drought for the league’s most popular ballclub, leading long-time Ginebra star Mark Caguioa to triumphantly shout, ‘Wala nang kangkungan’ at the end of his post-game interview.

But where does Brownlee’s title-clinching triple rank among the many big shots in PBA Finals history? SPIN.ph looks back at some of the greatest clutch moments in the league’s many classic championship battles and lets you be the judge of that.

With the team down 1-3 in the series, Ginebra’s chances of winning the 1991 Open Conference crown against Shell looked bleak. But Ginebra was able to force Game 7, where Distrito provided the heroics. With five seconds left and the score tied at 102, ‘The Destroyer’ soared for a running shot over Shell defenders to put Ginebra ahead with just a second to play in the game, completing the team’s comeback from a big deficit. It’s hard to find anything that could match the magnitude of Distrito’s memorable shot, in the biggest moment of a do-or-die battle for the title, which reasserted the ‘Never Say Die’ mantra of Ginebra.

Tan made the biggest shot of his career and for the Sta. Lucia franchise when he sent the Realtors to their first PBA crown in the team’s history when he converted a triple to break a 72-72 tie in Game 6 of the Governors’ Cup title series. Incidentally, Tan’s stepfather Norman Black was the coach of that Realtors squad that waited for nine years before winning the title. It was also Tan’s only made basket from beyond the arc for the entire series. Ironically, Black was coach of the Meralco team that lost to Ginebra in the most recent finals, no thanks to Brownlee's shot.

With the Beermen down by two late in the 2015 Philippine Cup Finals decider, Santos banked in a go-ahead triple with 43.7 seconds left. The Beermen eventually took Game 7 with an 80-78 win, thanks to Santos’ no-hesitation three that put the squad back to the top after dispiriting spiral that was labeled by fans as ‘Petronovela.’ 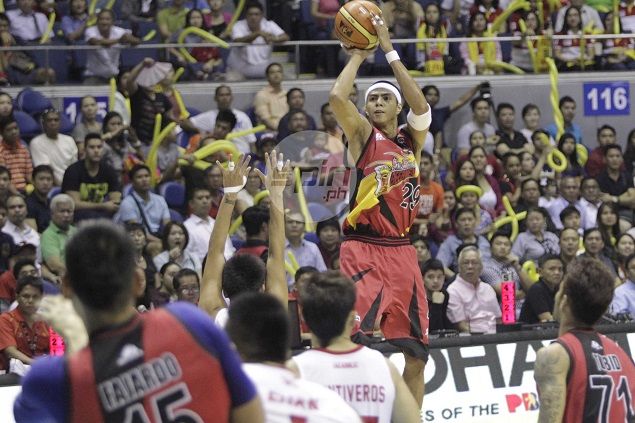 Adornado scored a basket with 1:25 left in overtime to put U-Tex ahead, 99-98, which turned out to be the winning basket in the Wranglers’ title victory in the do-or-die match of the Open Conference finals against Toyota. Adornado’s big basket capped the Wranglers’ historic comeback from four points down with 16 seconds left to force overtime, thanks to a basket by Aaron James and free throws by former Boston Celtics cager Glenn McDonald.

The Purefoods Hotdogs won their first title two years after the franchise’s inception, thanks to Solis, who hit a crucial three-pointer that gave them a four-point lead with seconds to play in Game 5. Alaska’s Frankie Lim responded with his own triple to trim the lead down to one, but the Milkmen ran out of time as Purefoods went on to take the crown. It marked the beginning of the winning tradition of the Purefoods franchise that became a household name to Filipino fans.

It was not included in the list since it was a free throw made, not a field goal, that sent Game 7 of the 2012 PBA Commissioner’s Cup in overtime against Talk ‘N Text. Still, it’s was one of the most cardiac moments in league history.

De Ocampo scored a team-high 34 points, including the first eight in double OT, that led Talk ‘N Text to a classic win in Game 7 of 2015 PBA Commissioner’s Cup against Rain or Shine.

‘The Aerial Voyager’ hit a triple and dished the assist to Yoyoy Villamin for a five-point swing to force overtime, where Meneses’ teammates stepped up to seal the win in Game 7 of the 1995 All-Filipino Cup against Alaska. (Jump to the 3:40 mark of the video for Meneses' triple.)