BEAU Belga is not about to get away easily after his Sunday night antics against Ginebra.

The burly Rain or Shine big man has been summoned to appear at the PBA Commissioner’s Office on Tuesday after getting involved in several highly physical plays that marred the Elasto Painters’ dramatic 82-79 come-from-behind win over Ginebra on Sunday night.

Belga will appear before Commissioner Chito Salud at 11 a.m. along with teammate Raymond Almazan.

No player from Ginebra received a summon.

The Gilas Pilipinas reserve player got involved in at least three controversial skirmishes with Ginebra players Mark Caguioa, Eman Monfort, and import Michael Dunigan during a wild and tumultuous and tension-filled second half of the Commissioner's Cup game at the Astrodome.

Belga first got entangled with Caguioa as the two jockeyed for possession during a rebound battle, and then later on fell - unintentionally or not - o fallen Monfort as he tried to chase him down while the Ginebra point guard was streaking downcourt for a basket.

No foul was called on both Caguioa and Belga, while the Rain or Shine center was whistled for a regular foul against Monfort.

The veteran center from Philippine Christian University also had a heated exchange of words with Dunigan just as the two teams were going to their respective benches during a timeout.

Shortly after the game, Belga minced no words about everything that involved him inside the court. 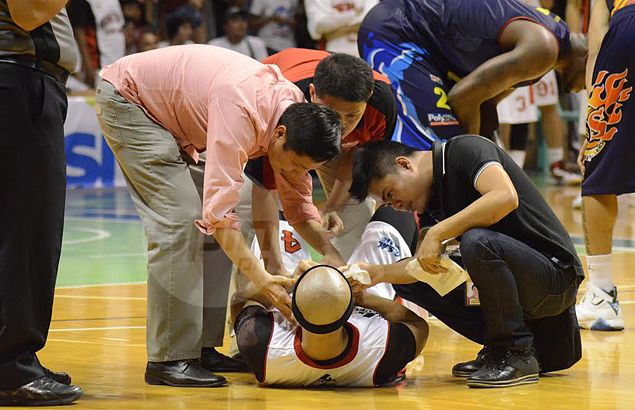 It is not clear why Almazan was included in the summon, although he had a confrontation with Dorian Pena who hacked the reed-thin Rain or Shine sophomore hard in the face while trying to stop his drive. The former Letran center retaliated by shoving Pena.

Almazan was whistled for a technical foul, while Pena was meted a Flagrant Foul Penalty 1.