BASTI Locsin was born toward the tailend of dad Noli's PBA career, but the 13-year-old is not oblivious to the success 'The Tank' had during his time.

Little wonder that his dream is to play for the one team where dad spent the best times of his career.

Basti has obviously brushed up on his PBA history, saying he believes his dad would not have become popular during his PBA days had he not played for Ginebra under charismatic playing coach Robert Jaworski.

The elder Locsin was the top overall pick in 1994 by Tondena 65 Rhum Masters (the old name of Ginebra) and won a championship (under Gordon’s Gin Boars) in the 1997 Commissioner’s Cup. He averaged 18.5 points, 8.8 rebounds and 2.9 assists in his rookie season and spent five years with the Kings.

But for the son, who was born in 2001 when Locsin was already playing for his third team, Tanduay Rhum Masters, in a PBA career that also had stops at Red Bull, Talk 'N Text, Pop Cola and Sta. Lucia, Basti only remembers one team that his dad played for.

When asked which other teams his dad had played for in the PBA, the kid stammered. 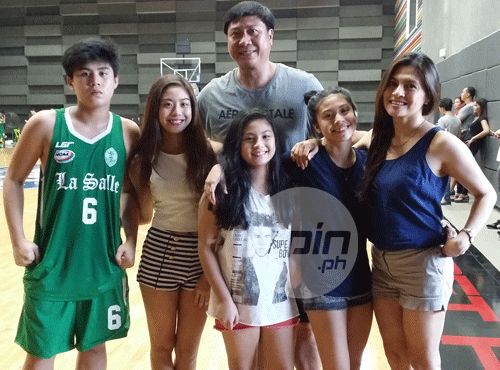 Asked about the present struggles of Ginebra, Basti showed optimism that Ginebra can beat the odds same way his dad’s team recovered from the a woeful campaign in his first two years in the PBA highlighted by a 0-10 win-loss slate in the 1995 Governors’ Cup.

As for Basti's own basketball dream, La Salle Greenhills assistant coach Allen Ricardo hopes that the kid's lack of height would push the sweet-shooting guard to embrace a shift to the point guard spot.

Basti is the third child of Noli and Maita. The other kids are Alex, Gabe and Seth.

And what is his advice to his son?

Here's a video of the interview with the Locsins: