SOTY 2020: Ginebra gets nod as Team of the Year after double celebration

THE euphoria from Barangay Ginebra's conquest of another PBA Governors’ Cup title in January at the Mall of Asia Arena when LA Tenorio set a bigger goal for the league's most popular ballclub – win a Philippine Cup crown.

“The last time we hugged [to celebrate a championship], he told me, ‘This one is nice, but we have to win the all-Filipino,’” Ginebra coach Tim Cone said.

“He drove this motivation throughout this whole tournament. More than just the points, the shots or whatever, to me that’s why he was our MVP for this bubble,” Cone added.

The hunger was understandable

Champions in several import-laced conferences, the Gin Kings had not won in an all-Filipino conference since Jong Uichico led a title run in 2007 that culminated with Jayjay Helterbrand capturing the Finals MVP in that series against San Miguel.

That mission was accomplished in 2020 as Ginebra ended that title drought in the most prestigious conference of the league by beating TNT in five games in the finals.

For that, the ballclub was chosen by SPIN.ph as one of its 10 Sports Heroes of the year. 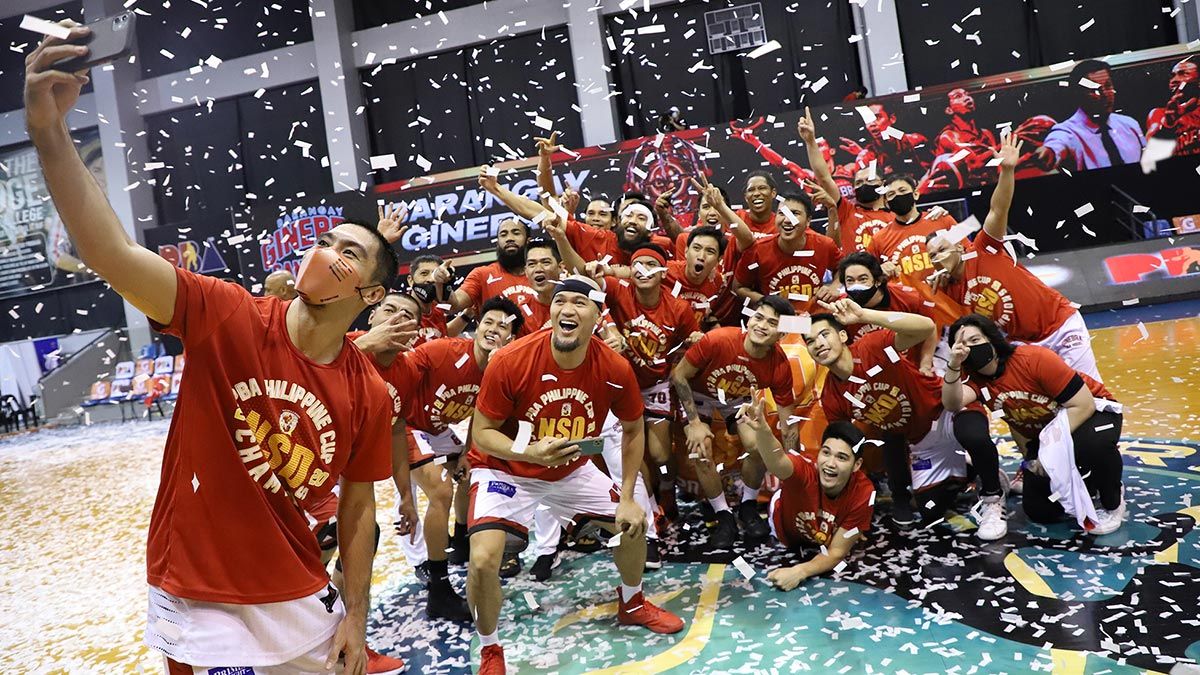 As with other achievements, the feat was in no way easy and the challenges didn’t include the COVID-19 pandemic that delayed the Gin Kings’ title coronation.

Ginebra groped for form in the lead-up to the bubble which was organized by the league for the safe conduct of the 2020 season. Top stars Tenorio and Japeth Aguilar dealt with injuries and entered the bubble just in time for the October tip-off.

In spite of that, Ginebra got off to a strong start with Stanley Pringle leading the Gin Kings’ 4-0 start to the bubble. There were also solid plays from the likes of Scottie Thompson, Aljon Mariano, and Prince Caperal in the eliminations and they ended up with an 8-3 record and first place in the team standings.

In the next round, Ginebra cruised to a quarterfinal victory over Rain or Shine, but that was not the case come the semifinals in a rematch with Meralco, the same ballclub the Kings beat in that Governors’ Cup finals campaign.

The Gin Kings were pushed to the limit with the Bolts forcing them to play a knockout game for a spot in the finals. Rising to the occasion in the tight contest in Game Five was Thompson, who buried a three-pointer with barely a second left for an 83-80 victory for Ginebra and a trip to the championship contest against an emerging TNT squad.

It was at this point of the conference were Tenorio and Aguilar picked up the cudgels for the team.

Tenorio was a true court general for Ginebra from the get-go, and in Game One, he left an imprint in the Kings’ 100-94 overtime win over TNT – from the assist pass to Arvin Tolentino that sent the game into overtime and to Aguilar to complete the victory.

TNT won in Game Three, but it proved to be the last victory of the Tropang Giga in the season. Tenorio and Aguilar came through in the following match, each having 22 points and Ginebra closed in on the crown with a 98-88 win.

Aguilar notched 32 points in Game Five as the Gin Kings won, 82-78, prompting a celebration from Ginebra fans across the country but at the comfort of their own homes. Tenorio was later adjudged as the Finals MVP to the championship that he targeted from Day One.