ARIZONA Reid put on a shooting clinic in the second half as he led San Miguel Beer to a 129-114 whipping of his former team Rain or Shine, keeping the Beermen's flickering playoff hopes alive in the PBA Commissioner’s Cup on Friday at the Smart Araneta Coliseum.

Reid, whose playing rights were released by Rain or Shine to the Beermen more than a month ago, banged in four consecutive three-pointers early in the fourth period to spark a run that opened a 109-90 lead for San Miguel.

It was All-San Miguel from there in a game marred by a heated exchange of words between Reid and Rain or Shine coach Yeng Guiao.

Guiao, along with Rain or Shine lead assistant coach Caloy Garcia, had a verbal tussle with Reid with the outcome all but decided. The three were slapped with technical fouls.

Seconds later, Guiao gave Reid a slight nudge while the SMB import was inbounding the ball, prompting the referees to toss the fiery Rain or Shine coach out on a second technical with two minutes left and San Miguel way ahead, 123-104.

Austria was the first to restrain the long-haired Reid when the former High Point standout engaged Guiao in a verbal tussle in the sidelines.

“I told him not to say anything because it’s already a won game. Pero siguro, he was just trying to celebrate, siyempre, you know our situation,” he added. 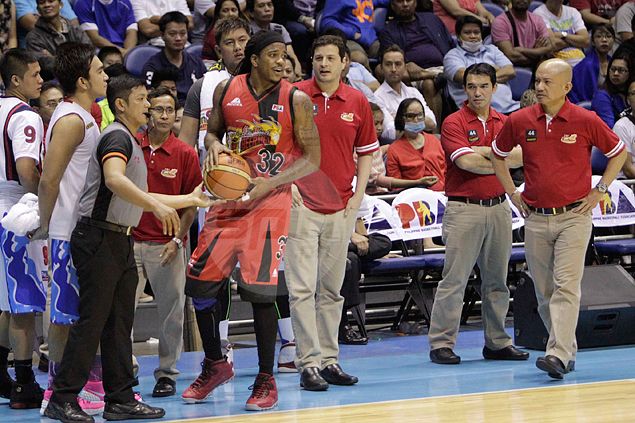 Reid, who led the Elasto Painters to a runner-up finish in last season’s Governors Cup, banged in 41 points, going 6-of-10 from three-point zone, while adding, eight rebounds, four assists, and four steals.

“We’re just trying to win the game, while that incident with coach Yeng, I don’t take it as personal. He said I should have been more respectful,” Reid said later on television after winning co-Best Player of the Game honors with June Mar Fajardo.

The 6-10 Fajardo added 30 points and 19 rebounds for the Beermen, who scored the most points in a PBA game over the last three seasons - or since Talk 'N Text defeated Powerade in overtime, 133-126, in Game Three of the 2012 Philippine Cup Finals, according to chief statistician Fidel Mangonon III.

The win resuscitated the Beermen’s playoff hopes as they improved to 3-6 overall, just half a game behind the Alaska Aces who are currently at 10th spot.

On the other hand, the loss dealt a big blow to Rain or Shine’s bid for a top-two finish - and twice-to-beat advantage in the playoffs - as it fell to a tie with Purefoods Star at 5-3 in third place, a game behind co-leaders Talk 'N Text and Meralco.

Import Wayne Chism tied the conference-high by scoring 50 points to go along with 16 rebounds as he tried to carry the fight for Rain or Shine, which failed to provide the much-needed local support