AS calls for Leon Rodgers' replacement mounts, Barangay Ginebra officials remained tightlipped about the fate of the import as the team continues its downward spiral in the PBA Philippine Cup.

Just last week, Ginebra’s active coach Juno Sauler quashed reports that the team tried to sign former Best Import awardee Gabe Freeman, insisting the Gin Kings have decided to stick it out with Rodgers after an assessment done by the coaching staff.

Ginebra's fortunes haven't changed since then, with the team absorbing its third loss in five games in the import-laced tournament on Sunday night at the hands of Talk 'N Text, 87-94, again with Rodgers as import.

It is unclear if Ginebra coaches have changed their mind about Rodgers after the latest loss, but it is almost certain Rodgers will still suit up for the Gin Kings when they take on Air21 on Wednesday.

However, a source revealed that Ginebra officials tried to negotiate with representatives of former Los Angeles Lakers back-up center Josh Powell, who is currently connected with the Guangdong Southern Tigers in the Chinese Basketball Association.

But the same source revealed a deal has been elusive owing to several 'demands' of the Powell camp.

There was no doubt Powell could've been a promising catch for Ginebra. The 6-9, 240-pound center was a member of two Lakers champion teams in 2009 and 2010 in an NBA career that also included stints with the LA Clippers, Dallas Mavericks, Atlanta Hawks, and the Golden State Warriors.

The former North Carolina State standout hooked up with the New York Knicks but was waived just before the start of the season on October 25.

Powell is also having quite a career in the Chinese league, where he averaged 15 points, 9.9 rebounds, and 1.6 assists in 42 games with the Guangdong Tigers.

According to Asia.basket.net, his best game came last February 21 when he had 29 points, 11 rebounds and four assists in a win against the Shanghai Sharks. His last recorded game came on March 13 in Guangdong's win over the Beijing Ducks where he had 17 points and 15 rebounds.

As the waiting game for Ginebra's import situation continues, fans are starting to grow impatient.

Here is a video of a mini-survey conducted by Spin.ph among fans, most of whom pin the blame for Ginebra's sputtering start on Rodgers' seeming lack of energy, his inconsistent shooting, and the amount of shots he takes every game.

Fans have also made their feelings known on social media networks. 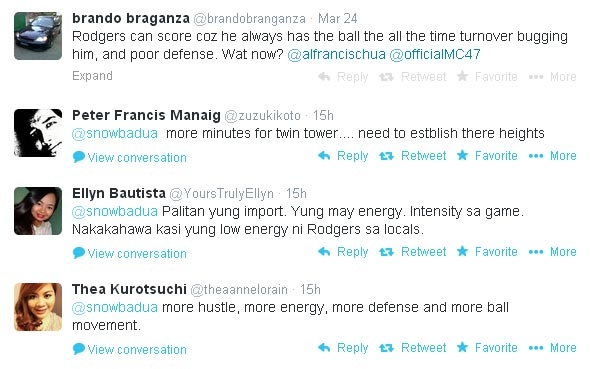