ARWIND Santos has welcomed Renaldo Balkman back at San Miguel Beer with open arms, looking forward to teaming up with the controversial import in their defense of the PBA Commissioner’s Cup title.

Santos reiterated he doesn’t mind reuniting with Balkman, who choked him while the local star was just trying to calm him down amid an outburst over a non-call in 2013, leading to his ban from the league that lasted five years.

The two teammates have already mingled.

Balkman comeback’s was completed when the Beermen decided to replace Troy Gillenwater, who failed to lead SMB to a win in two games. He also made matters worse by having his own run-in with an official, leading to his early ejection in SMB’s 123-119 overtime loss to Rain or Shine last Sunday.

That revived the talk on who between Balkman or reigning Best Import Charles Rhodes should take over.

The Beermen decided to pick Balkman, who is coming off a championship conquest in the Asean Basketball League with Alab Pilipinas.

And Santos is keen on conspiring with Balkman in helping the Beermen in their title-retention bid. 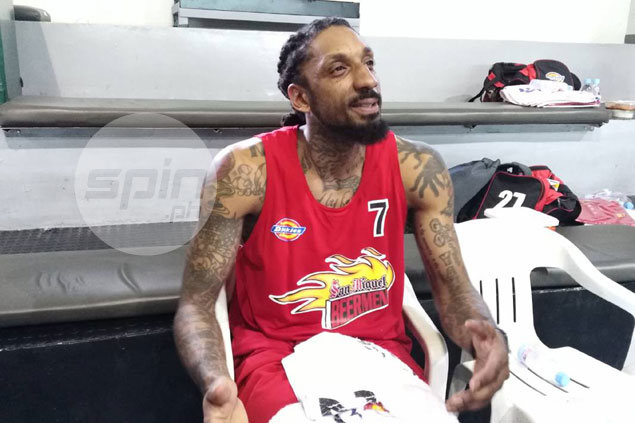 Santos, however, will have to keep making a small sacrifice in terms of his playing time as he plays the same position as Balkman.

“Kanina, ni-run namin, magkakasabay kami, maganda naman ang tingin ko, nangangamoy panalo sa game namin sa Dumaguete,” he concluded ahead of their road game against Alaska on Saturday when they hope to put an end to their two-game losing streak.