Arwind Santos agrees to sit down with Balkman, but wishes it to be  private meeting

ARWIND Santos and Renaldo Balkman are set to meet up, hopefully, anytime next week - not to bury the hatchet, so to speak, but for the two competitive former teammates to reconnect.

Santos bared the dinner earlier proposed by the talented import now plying his wares for Alab Pilipinas in the Asean Basketball League (ABL), is already being arranged - five years after Balkman was banned for life from the PBA for choking his former teammate during a game.

Santos, 36, stressed the meeting will be just that – a meeting, and not anything else, since he and Balkman have been okay after that infamous choking incident on March 8, 2013 that led to Balkman's life ban and a fine of P250,000. 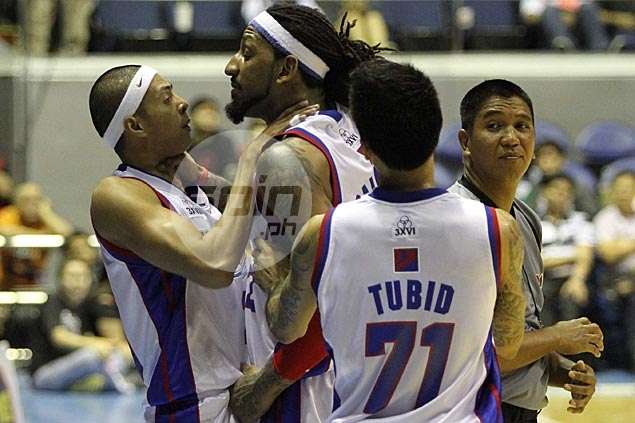 Balkman had sought out his former teammate when he arrived in the country three weeks ago to team up with Barangay Ginebra resident import Justine Brownlee at Alab, hoping to sit down with Santos and talk about everything under the sun, but mostly about basketball, of course.

“Soon to come, I’ll meet him over lunch, dinner, or whatever,” said the 33-year-old Puerto Rican and former NBA player, who expressed his gratitude to Santos and the entire San Miguel team for having his back despite everything that transpired.

Santos disclosed Balkman’s agent, Sheryl Reyes, is on top of things and is arranging the meeting by next week, given the hectic schedule of San Miguel, which will face off with surging Globalport and Barangay Ginebra Kings one after the other this week.

Santos said he wants it to be a private meeting with Balkman and some people close to them.

The former UAAP MVP out of Far Eastern University knows Balkman has already learned his lesson and wishes him the best in his campaign with Alab.

While he would be glad to see Balkman get reinstated in the PBA, he said it’s all up to the league to decide on the matter.