THERE’s no rest for the weary as Arwind Santos and KG Canaleta did their share by performing community service for the league straight from their respective team practices.

Santos and Canaleta joined former PBA star Vince Hizon at the PBA office in Libis by call-time on Tuesday afternoon, unmindful of their tired bodies after attending the practices of San Miguel and Meralco earlier in the day.

Together with Hizon, the former Barangay Ginebra stalwart and heartthrob and now Blackwater alternate governor, Santos and Canaleta joined officer in charge Willie Marcial, Eric Castro, and the rest of the league staff in the latest stop of the weekly PBA Homecourt.

For its second edition, the group visited Barangay Escopa 2 and 3 in Project 4, Quezon City.

And just like Beau Belga, Rodney Brondial, and legend Benjie Paras before them, the trio enjoyed the surprise community tour where they took time out to mingle with PBA fans.

“Masaya at magandang experience din,” quipped Santos, who came ready for the grueling event as he changed in an all-red outfit the moment they arrived at Barangay Escopa 3.

The CSR (Corporate Social Responsibility) project being initiated by the league this season is also a way of lessening the fines meted on players for various infractions during a game like Belga and Brondial before.

But those who haven’t been reprimanded yet like Santos and Canaleta are also welcome to join, according to Marcial.

Hizon was overwhelmed by the experience that for the first time, he took a video of the event which he posted on Facebook Live.

“It’s my first time to go live,” he admitted. 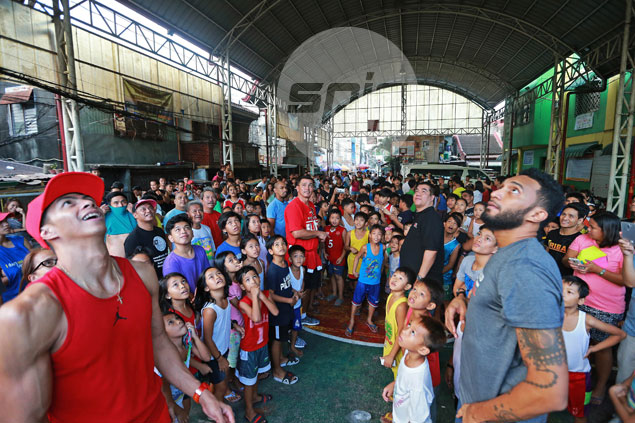 Santos lauded the league’s initiative, though he wished that it will be able to maintain order within the different barangays the rest of the way.