With the outcome of Game One of the PBA Philippine Cup hanging in the balance, Casio once again slipped on the floor at midcourt of the Smart Araneta Coliseum that almost cost the Aces the match against the San Miguel Beermen on Wednesday night.

Good thing, the heady playmaker out of De La Salle didn’t lose control of the ball and was only forced to a jumpball by San Miguel’s Chris Ross in the dying seconds of the tightly-fought encounter which Alaska won, 88-82, in overtime.

Coach Alex Compton admitted seeing Casio slip again on the floor sent chills down his spine, the memory of the Alaska guard’s infamous tumble in Game Four of last season’s Governors Cup semifinals against Rain or Shine flashing back in his mind.

“I love that kid (Casio), so I want him to get the ball. He’s great. His IQ is like an Einstein, but moisture seems to follow him around,” he said of the incident that took place late in regulation play and score tied.

“But it (Casio’s slip from last season) did come across my mind from half a second. I was frustrated.”

The scene remained obviously vivid for Compton as Casio was then cruising alone for a breakaway layup with a chance to give Alaska the lead against Rain or Shine, only to let the opportunity slip away when he stepped on a wet spot on the floor and got injured.

The Elasto Painters made the most out of the break and went on to steal the win in overtime, 123-121.

Casio sat out the deciding Game Five which Rain or Shine likewise won and advanced to the finals against San Mig Coffee.

But unlike Compton, Casio said never thought about the incident happening to him again on this night when the Aces fought back from a 22-point first quarter deficit to stun the Beermen.

“No (it didn’t bring back bad memories). Past na 'yun. Unfortunately, nangyari (ulit). Pero good thing we ended up with the win,” said the former Gilas Pilipinas stalwart.

“You just have to look at the next play. Nangyayari yung mga ganung instances, pero you have to think about the next play kasi mabilis ang transition sa basketball so kalimutan mo na lang tapos laro ka na.”

He did exactly that.

Casio buried a huge trey in overtime play to put Alaska in front for good, 79-76, before Dondon Hontiveros followed it up with another one from downtown to cap a run of six unanswered points by the Aces.

The Alaska guard went on and finished the game with 13 points to go along with three rebounds, three steals, and two assists.

Yet even Casio himself was at a loss for words when asked on why he kept on slipping on the floor every time Alaska is playing in the big stage.

Here's a grab of the Spin.ph story from the first slip: 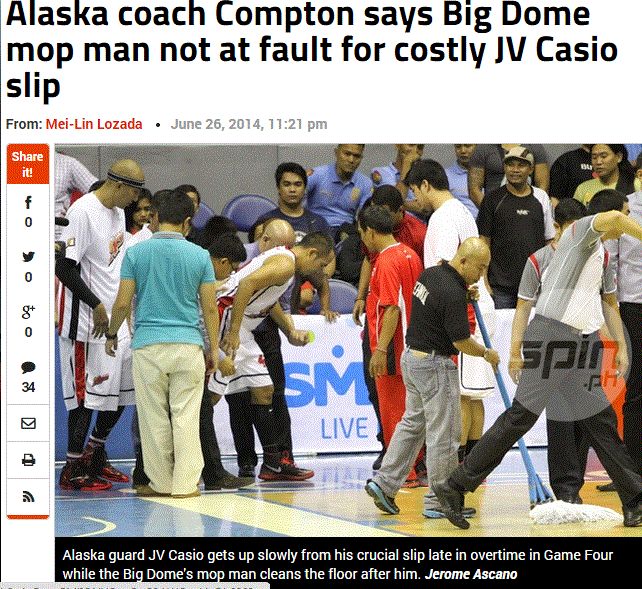