ANDRAY Blatche is out of Gilas Pilipinas' lineup for the 2014 Asian Games after the Olympic Council of Asia (OCA) stood by its three-year residency requirement for all naturalized players despite a differing opinion from world basketball body Fiba.

According to Gilas team manager Aboy Castro, the Incheon Asian Games Organizing Committee (Iagoc) has allowed the Philippines to bring in Marcus Douthit and Jimmy Alapag and make other changes to the lineup.

"Gotta get Marcus in game shape, pronto," said Reyes in a tweet.

In a letter addressed to Fiba secretary-general Patrick Baumann dated September 9, OCA director-general Husain Al-Musallam said the Olympic body is not budging from its stand that Blatche should show proof he has resided in the country for the past three years for him to be eligible to play for Gilas in the Incheon Games.

Al-Musallam cited Article 49 of the OCA Constitution and Article 41 of the Olympic Charter stating that “an athlete, who has changed nationality or acquired a new nationality, shall not participate in the OCA Games to represent their country until three years after such change or acquisition.”

Here's the OCA letter in full: 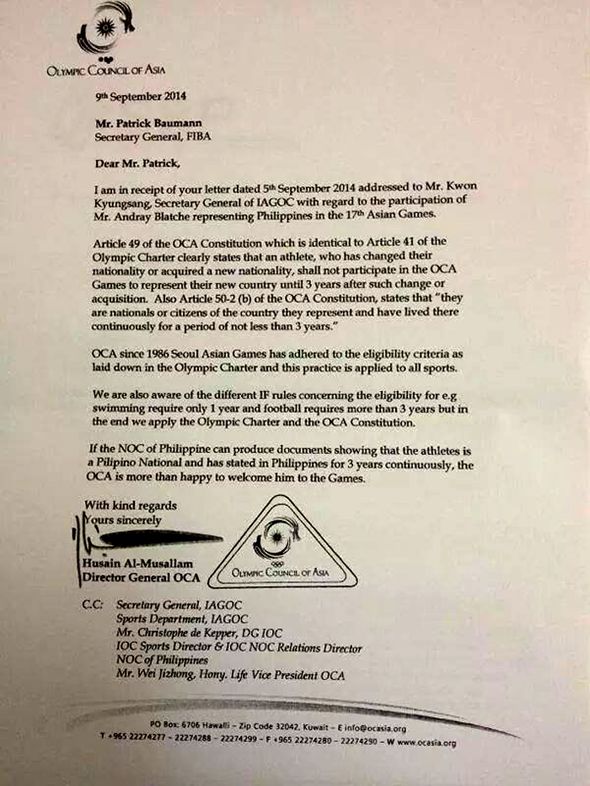 Al-Musallam also cited Article 50-2 (b) of the OCA Constitution that said athletes competing in the Asian Games should be "nationals or citizens of the country they represent and have lived there continuously for a period of not less than three years.”

The correspondence was in response to Baumann’s letter urging a review the decision of the Incheon Asian Games Organizing Committee (Iagoc) not to allow Blatche to play for the Philippines since Fiba recognizes him as a Filipino naturalized player who just saw action in the Fiba World Cup in Spain.

Al-Musallam said the OCA rule on residency has been in place since 1986, pointing out that the Philippines itself was among the members who passed the rule.

“OCA since 1986 Seoul Asian Games has adhered to the eligibility criteria as laid down in the Olympic Charter and this practice has been applied to all sports,” said Al-Musallam.

The OCA said it is aware of the international federation rules, but insisted that its rules should apply in the Asian Games.

“We are also aware of the different IF (international federation) rules concerning eligibility for e.g. swimming require only 1 year and football requires more than 3 years, but in the end we apply the Olympic Charter and the OCA Constitution,” said Al-Musallam.

Al-Musallam said OCA will gladly allow Blatche to play for the Philippines if the Philippine Olympic Committee (POC) can show proof he is stayed in the country for the last three years.

“If the NOC of Philippine can produce documents showing that the athlete is a Pilipino National and has stated in Philippines for 3 years continuously, the OCA is more than happy to welcome him in the Games,” Al-Musallam said.