IT’S one instance when Alvin Patrimonio wishes he was a player again rather than the Star Hotshots team manager that he is right now.

For a moment, the legendary player lost his cool in Game Four of the PBA Philippine Cup semifinals between Star and Barangay Ginebra when the referees failed to call a traveling violation on Dave Marcelo.

The usually mild-mannered cage great was so furious he joined the Hotshots coaching staff in confronting game officials over the non-call which led to a Kevin Ferrer basket and a 69-62 lead for the Kings early in the payoff period.

Patrimonio was spared a technical but Star head coach Chito Victolero was slapped with a ‘T.’

The 50-year-old Patrimonio later shared the restrictions he imposes on himself as a top official of the storied franchise during such situations.

“Hindi mo lang mailabas (yung emotions), whereas kung player ka, mailalabas mo through your game,” he said at the end of the match won by the Kings, 93-86, before a huge weekday crowd at the Smart Araneta Coliseum. 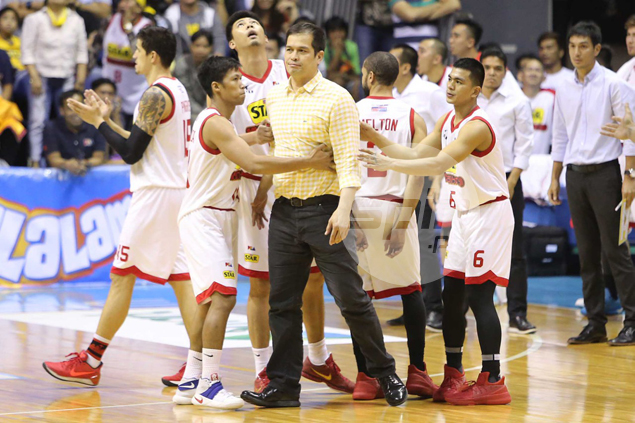 Patrimonio refused to dwell on the officiating in the best-of-seven series currently tied at 2-2 except to say he’s proud of the way the Hotshots had been playing despite the odds they are facing.

“Nakita naman natin dikit yung game, kahit may ano….,” he said, stopping in mid-sentence so as not to say anything that could get him in trouble.

“But I’ m very proud of the players kasi lumalaban. Nakakatuwa,” added ‘The Captain,’ one of only two players in league history to win the MVP award four times.

Game Five will be on Friday at the Mall of Asia Arena, and Patrimonio said it will definitely test the character of the team after winning the first two games of the series, and then losing the last two.

And lest the Hotshots lose their cool again, Patrimonio is making sure they will all stay focused in the next game.