All the numbers that define the greatness of coach Tim Cone

METHINKS there is no doubt as to who the greatest PBA coach of all-time is.

Last Friday evening at the Mall of Asia Arena, Earl Timothy Cone, or coach Tim to almost all of us, won his 22nd PBA championship, steering Barangay Ginebra to a title-clinching 105-93 win over Meralco in Game 5 of their best-of-seven Finals for the 2019-20 PBA Governors Cup.

It was the fourth straight season he has given the Kings at least one championship.

Over the last eight seasons with the San Miguel Corp. group, Cone has won nine championships in 11 PBA Finals appearances, inclusive of his previous stint with the now-Magnolia franchise.

Just how awesome is Cone’s collection of 22 titles? It is now seven ahead of the 15 of the late Virgilio “Baby” Dalupan, in whose honor the PBA Press Corps’ Coach of Year Trophy is named after.

The 22 is also just five titles shy of the combined number of championships won by the rest of the active coaches in the PBA right now - Black’s 11, Leo Austria’s 8, Yeng Guiao’s 7 & Chito Victolero’s 1. 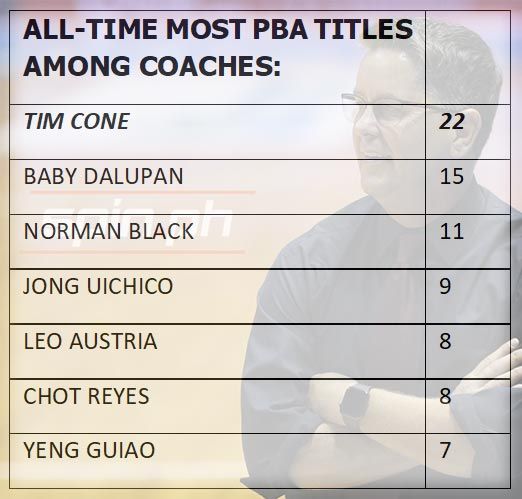 Aside from Cone’s fourth title with Barangay Ginebra, he had previously won 13 with Alaska and five with San Mig Coffee/B-Meg, making him the only coach to win at least four titles with three different franchises. No other coach has won more than two championships with three different ballclubs.

We don’t even need to mention that Cone is the only two-time grand slam-winning coach in the league - winning his first with Alaska in 1996 and his second with San Mig Coffee during the 2013-14 season.

Cone’s most recent championship with the Kings was also already his ninth title overall in the PBA Governors' Cup alone, and third with Barangay Ginebra in the last four seasons. The Kings had previously never won in the Governors' Cup.

Moreover, Cone’s nine Governors' Cup titles is just one shy of the COMBINED titles won by the rest of the other Governors Cup champion coaches with no coach having won more than two. 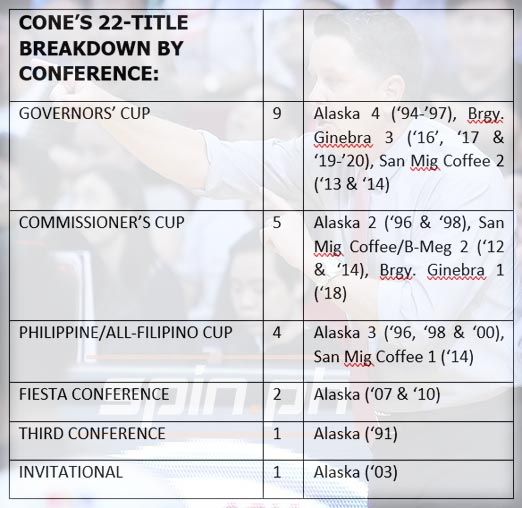 Which teams has Cone’s teams beaten the most in the PBA Finals in his 22 championships? The San Miguel Beer franchise has been his most common victim, having won six of his titles at the Beermen’s expense. 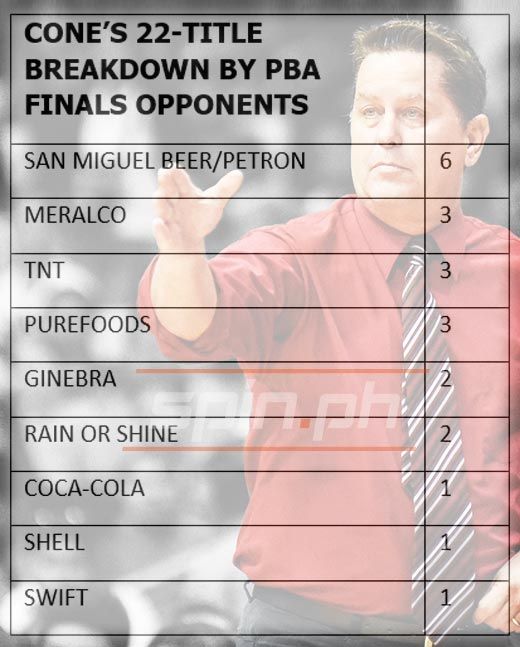 In effect, Cone’s nine titles won so far for the two SMC teams he’s coached (5 for San Mig Coffee/B-Meg & 4 for Brgy. Ginebra) are still two shy of the combined PBA Finals heartbreaks he’s given the three SMC teams while he was still with Alaska (6 for SMB/Petron, 3 for Purefoods and 2 for Ginebra).

That recent PBA Finals win by the Kings and Cone over Meralco also kept the latter’s unbeaten streak over Black in a PBA Finals. 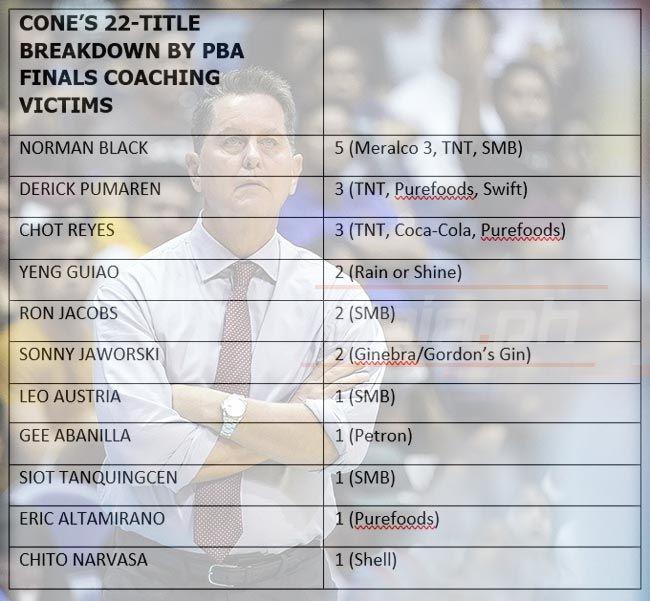 So which teams and coaches have proven to be 'supercoach' Cone’s ‘kryptonite’ in the PBA Finals?

Cone may have won three titles at the expense of Purefoods while still with Alaska, but he actually lost four times in the PBA Finals to the same franchise. So he hasn’t been exactly that successful against his current team’s Manila Clasico rival, at least in a championship series.

Among the coaches who have had Cone’s number in the PBA Finals, fortunately for him, they are no longer coaching in the PBA right now.

Cone may have won three titles at Chot Reyes’ expense in a championship series, but he also lost thrice to Reyes - and against three different teams. 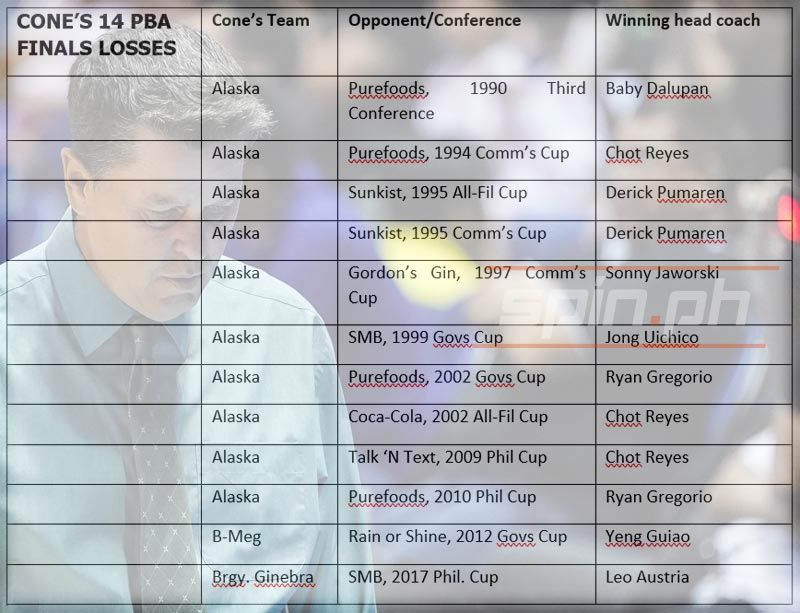 And of the eight coaches which have beaten Cone in a PBA Finals, only two remain - Guiao and Austria.

Cone isn’t about to slow down. He feels this current Barangay Ginebra squad is just beginning to show its potential with new guys Stanley Pringle and Art dela Cruz having just tasted their first championship and just getting into the groove, Japeth Aguilar slowly coming into his own, with Justin Brownlee always there and consistent with his numbers and other contributions and with veterans like Mark Caguioa, LA Tenorio and Joe Devance continuing to hold back Father Time.

This early, Cone has set his sights on the Philippine Cup title which the Kings haven’t won in the last 13 years. It is also a conference he personally has won just once in the last 20 years (with San Mig Coffee in 2014).

Even at 61 years old, Cone also seems bent on continuing to coach like his idol, the late Tex Winter, who coached until his late 80s.

San Miguel Beer is the winningest franchise in the PBA with his 26 titles. Just four behind, Cone may also just break that record in the years to come.