Compton thought 'burly' Campbell ideal for Alaska; he got a buff version instead

ALASKA coach Alex Compton was hoping he already found an import who can match up against the PBA’s best big men and the incoming imports in the Commissioner’s Cup when Sean Chambers recommended Tony Campbell.

That was until Compton found out that Campbell had lost over thirty pounds, transforming from a burly big man into a slim, stretch slotman.

“He used to be 260 (pounds) when he was in college. Watch his clips and you’ll see, burly yan. Pag dating dito, may abs na. sabi ko,’anong nangyari sa’yo?’” Compton said of the Ohio product with a laugh on Wednesday. “Nagpa-condition talaga eh. Hindi siya yung high-flying dunker, ngayon, medyo mataas na talon niya. He lost a lot of weight.”

Compton admitted a burly Campbell was what he was looking to see for the Aces to have someone to defend the likes of reigning Best Import Arinze Onuaku of Meralco and TNT’s first-choice import, Josh Smith, as well as top locals June Mar Fajardo and Greg Slaughter.

“He’s (Campbell) a very skilled player, but he’s not like…Arinze, he’s a house,” Compton said. “Him and Josh Smith, those guys are huge. Those guys are different. They’re going to cause us some problems, and we need to be strong and tough to guard the biggest guys without fouling.”

“I liked the fact that he was two-sixty (pounds) before,” he added of his 6-foot-9 reinforcement. “That was something I was actually looking forward to. He’s two-thirty-five, so we got to lift him some weights, yung pagkain ko ibibigay ko din sa kanya.

“But he’s good, skilled player,” he continued. “He’s got really good potential that if he does well, I think this is the type of guy that could be a long-term import. But he’s got to do well.”

Campbell continued to show his stuff by leading the Aces to a second straight tune-up game win, tallying 22 points, including 13 in the first period, in their 81-75 win over Ginebra on Wednesday. 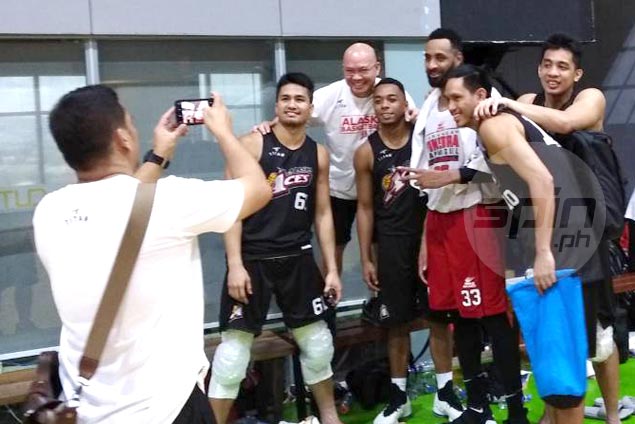