ALASKA team owner Wilfred Uytengsu on Thursday spoke out on the rehiring of the PBA marketing head who resigned in the midst of a controversy, saying it is a 'disappointing' board decision that "speaks poorly of the league as a professional organization."

Uytengsu aired his view three days after the board of governors approved the reinstatement of Rhose Montreal as marketing director - and two weeks after accepting her resignation amid allegations on social media that she submitted spurious documents when she applied for the position.

Curiously, Alaska was the only league member which, in a special meeting of the board on Monday, voted against rehiring Montreal, who, according to documents that made the rounds on social media, backed up her claim that she graduated from the University of the Philippines with false documents.

The UP Registrar's Office has since released a document saying Montreal did not graduate from the institution.

[See PBA board accepts marketing head's resignation, then rehires her]

The voting was 10-1 with one abstention for the reinstatement of Montreal for "humanitarian reasons and exemplary performance," according to a statement released by the league after the meeting.

According to Uytengsu, the rest in the PBA board asked Alaska, represented by Dickie Bachmann, to reconsider its opposition to Montreal's rehiring, so the league can make a unified stand on the contentious issue.

"We were asked to reconsider our vote so Alaska won't look bad to the public, and I said, to the contrary, and you know Dickie is our representative, I think that we took the moral high ground, because if we look at the severity of the offense, it speaks poorly of the PBA as a professional organization that we hire someone when they have committed that activity of falsification of documents," Uytengsu told Spin.ph.

"I mean, what now? When you're negotiating documents on behalf of the league, and we have this kind of behavior, it's disappointing," the outpoken Alaska team owner added.

"It's disappointing because now what we're saying, effectively, is, 'It's okay, you can forge your documents, we can give you a chance.' This is not an insignificant action. It would be like, look at it this way, Allan Caidic is probably the greatest three-pointer in the history of the PBA. But he still has to to get the shot off in 24 seconds. But do we say, 'For Allan, it's okay if its 25 or 26 (seconds).' Why should we do that?"

Alaska's stand, Uytengsu stressed, was not based on personalities but grounded on doing the right thing.

"This is nothing against Rhose personally, but there are repercussions from some actions. And now, the message is being sent that it's okay. You get a second chance when you do these things," Uytengsu, named Executive of the Year in the last PSA Annual Awards, said. 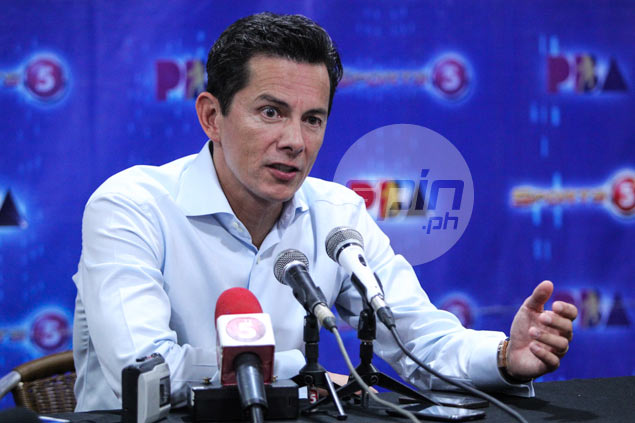 "If you look at the number of officials who have forged a document for a high-profile job in the US, and I'm talking specifically about sports, they have all resigned and no one from these institutions got them back. They may be hired in some other capacity somewhere else with full disclosure of what happened, and that's fine, because now the word is out.

"Should people get a second chance? Yes, but under the circumstances after all the information is disclosed. But should that person be rehired in the PBA? We didn't think so. We voted with that principle in mind."

Of similar concern for Uytengsu was the way the board 'usurped' the power of Commissioner Chito Narvasa in the decision to rehire Montreal. Narvasa was named the league's CEO in a concurrent capacity in the same meeting.

"I think more importantly, why did the board involve itself in a decision that the commissioner should make? The commissioner did not ask for her to be rehired, as far as I know," Uytengsu said. "So why is the board getting involved in a management hire that is clearly the responsibility of the commissioner?"

Uytengsu said he was appraised of the sentiments of the other members of the board, but made it clear that there was no compromise as far as Alaska's stand on the issue is concerned.

"Of course, if all the teams voted in favor, the league won't look bad because all the teams feel this way. But I don't think we'll ever be the franchise that takes the easy way out or the popular way out," he said.

"I knew it was bound to come sometime, it makes it difficult for the relationships, but I think at some point you can't have a collegial body unless you discuss all these things.

"We expressed a concern, I don't think it merited enough discussion, it was, 'Hey, a decision has been made. It's either you vote with us or we'll outvote you.' Essentially, without saying it, that's it, reading between the lines.

"I think people know us well enough that that's not who we are."

Asked about the board decision to appoint Narvasa as the concurrent CEO, Uytengsu said it merely brought the PBA back to the old leadership set-up when one man, the commissioner, ran the league.

He insisted there was no need for a league CEO in the first place.

"When I look at it, I don't know why the CEO position was ever created. I don't think it's necessary. If you look at every other professional league - if you look at the NBA,all of these leagues that are far bigger than the PBA, they have a commissioner, and that commissioner is tasked with running the league. Now that commissioner has head of marketing, head of finance, head of HR, head of business development, but it's one person.

"Is the commissioner the de facto chief executive officer? Yes he is. Does he need that title? I don't believe so. So I think by combining these two functions, yes it gives one person a responsibility of running the league, which it should be. But having these two-headed structure just didn't make any sense from the get-go.

"Looking at it from good business practices, I don't think you need two heads when the rest of the organization doesn't know who reports to who."

The rehring of Montreal and the way it was done by the board, Uytengsu said, also do not reflect well of the current league leadership.

"Up until such time that the owners feel that the commissioner is not doing that job, then he should do it. There will always be times when you're upset with the commissioner on an officiating issue, or like in this particular case, when the board usurped the commissioner's authority. That for me is quite curious, in a situation where as far as I know, I don't remember hearing the commissioner ask for it.

"Of course, he can say, 'Nothing I can do,' fine, if I'm told otherwise. But I can say, 'If the board doesn't have the confidence in me as a commissioner to make these decisions, then I don't really have the trust of the owners.'

"That is a curious thing. He probably should've taken a stance saying, 'No I'll get her back on my own basis,' or, 'No, I won't get her.' But pushing it off and letting the board do it is almost washing hands."