A RELENTLESS Alaska leaned on huge second-half surge to frustrate Barako Bull, 101-95, on Saturday and formalize its entry to the PBA Governors’ Cup quarterfinals at the Smart-Araneta Coliseum.

The Aces overhauled a 22-point first-half deficit behind a trademark suffocating full-court defense that led to their transition offense to pull off the stunning reversal.

Romeo Travis and Calvin Abueva provided the energy, while Jvee Casio, Vic Manuel, and Chris Banchero knocked down the telling baskets at crunch time for the Aces, who hiked their win-loss record to 7-2 to gain a share of the lead with San Miguel Beer.

“We had as bad a first half as I thought we could have, but I feel like this game was a tale of two cities,” Aces coach Alex Compton said. “It was the best of times and it was the worst of times.”

It was a heartbreaking defeat for the Energy, who led, 62-40, at the half, only to succumb to the pressure and suffer their first back-to-back losses this conference to slide to third spot after enjoying the view from the top for most of the conference.

For a while, though, everything seemed going the Energy’s way as they shot 54 percent from the field that allowed them to establish that sizeable cushion.

But the beginning of the end for Barako came in the third quarter where they saw the Aces embark on a 30-9 salvo capped by an RJ Jazul triple that allowed Alaska to come to within a solitary point, 71-70 with a little over two minutes to go.

The Aces’ finally took the lead just over three minutes gone by in the payoff period when Banchero converted a breakaway layup that made it 82-81, a gap that grew to nine points, 95-86, after a Casio three-pointer with less than three minutes left.

Romeo finished with a team-high 23 points, including 12 in the third, while Banchero added 20 points, seven boards, and four assists in 27 minutes.

Liam McMorrow led the Energy with 26 points and 15 boards, but was held to just one point in the final frame. 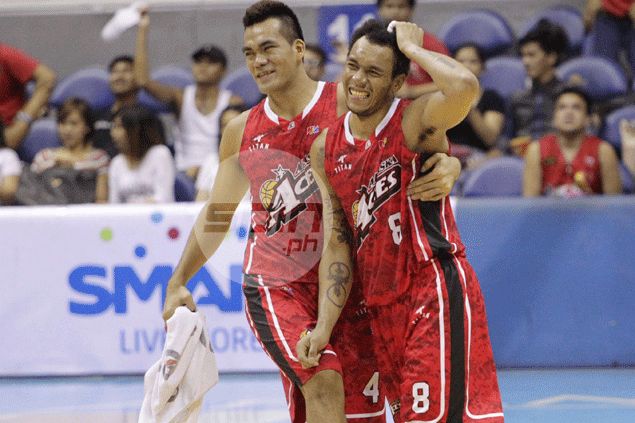