WITH a minimum two games left to be played for Meralco in the Governors Cup semifinals against TNT Katropa, Jimmy Alapag stands on the threshold of breaking one of the most hallowed records in PBA history.

The 5-8 Fil-Am guard currently stands at 1,237 career three-pointers, five short of Allan Caidic's 17-year-old record of most treys made in a career ahead of Game Three of the Meralco-TNT series on Saturday at the Smart Araneta Coliseum.

Depending on how long Meralco's campaign will last and how Alapag will fare from three-point distance in those games, there's a good chance the 'Mighty Mouse' will match - if not surpass - Caidic's record before the season is over.

That would only serve to amplify several similarities in the two sharpshooters' careers.

As per numbers crunched up by PBA statistics head Fidel Mangonon III, Caidic reached his record 1,242 three-pointers over 13 seasons with Presto, Great Taste, San Miguel and Ginebra. Alapag is also in his 13th season in the pro league after deciding to unretire prior to the 2015-1016 campaign.

The two also have long years of service to the national team - Caidic played in a record four Asian Games and also won the Jones Cup twice, among other acomplishments wearing the red, white and blue; Alapag distinguished himself with Gilas, serving as captain of the team that won a historic game against Senegal in the 2014 Fiba World Cup in Spain.

It's no surprise that the Philippines enjoyed its most success in international competition with top guns like Caidic and Alapag in the lineup. 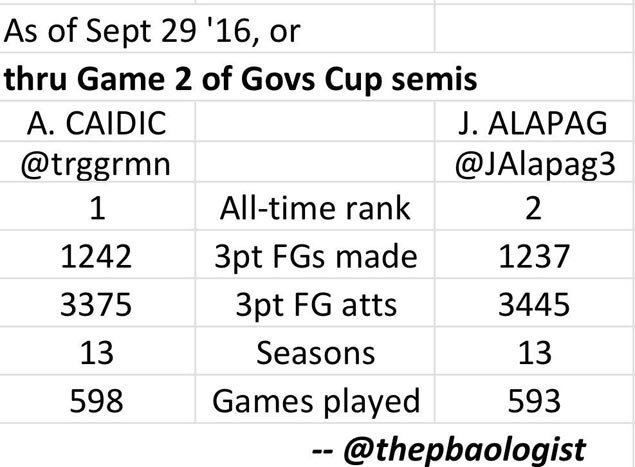 The similarities do not end there, since the two also happen to be at an almost identical pace on the way to the record.

Caidic reached his 1,242 total in a total of 598 games while Alapag, 38, currently has 593 games logged under his belt, meaning the former Gilas captain has five more games to get to the record faster than the 'Triggerman.'

As it is, Caidic already owns the higher percentage between the two. The former league MVP got to 1,242 in 3,375 shots for an amazing 36.8 percent career shooting clip from three-point distance, meaning he made almost four from every 10 three-point shots he put up.

Alapag's accuracy is lower but no less impressive. The Meralco guard reached 1,237 in 3,445 shots for a 35.9-percent shooting percentage.

But regardless of what happens from hereon, no doubt there's mutual respect and admiration for two of the best shooters Philippine basketball has ever seen. 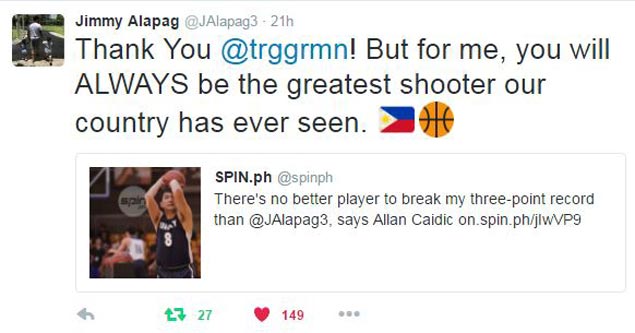 Bay Area Dragons
Read the Story →
This article originally appeared on Topgear.com. Minor edits have been made by the TopGear.com.ph editors.
POLL
Share this Poll:
Retake this Poll
Quiz
Quiz Result
Share this quiz:
Take this Quiz Again